Permission sought for eight-storey hotel on site of Twilfit House 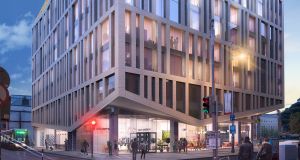 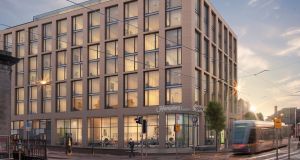 An investment group has sought planning approval to demolish Twilfit House at the junction of Jervis and Upper Abbey streets in Dublin 1 and replace it with an eight-storey, over-basement hotel, at an estimated €19.3 million to develop.

Abarta Investments, which is associated with investment group SW3 Capital, hopes to unlock the property’s valuable city centre site three years after acquiring it, with its consultants referring to the existing building as “a very inefficient use of land”.

The active street frontage afforded by these ground-floor facilities, in addition to Dublin City Council’s plans for the redesign of adjoining Wolfe Tone Park, will “energise the area”, according to architects at TOTP. They have designed a striking modern building for the site, with a facade incorporating a mix of light-stone, extensive floor-to-ceiling glazing and bronze screening.

SW3 Capital has been investing in new opportunities, such as its multifamily residential investments in south Dublin in partnership with Tristan Capital Partners, but has also begun disposing of properties it acquired in recent years.

SW3’s proposed Abbey Street hotel is in close proximity to the planned hotel development at River House on Chancery Street. The council granted planning permission earlier this year for the demolition of the former motor tax office on the site and the construction of a 249-bedroom hotel extending to 8,857sq m (95,336sq ft) in its place, which would be operated under the Hampton by Hilton brand.

An Taisce and a local resident have since appealed the decision to grant permission to An Bord Pleanála, which is due to decide on the development’s fate next month. Jalaluddin Kajani, a Pakistan-born Irish citizen, acquired the site last year.

As the sites of River House and Twilfit House are roughly a third of an acre in size each, the €8 million price paid in 2016 for the former, which is not as well located and has no rental income, highlights a more than doubling of values since SW3 acquired Twilfit House for €4.15 million in 2014, with the benefit of an annual rent roll of €350,000.

River House is now vacant, allowing for immediate redevelopment, which may have commanded a premium given the purchaser’s intentions.

The Kajani family own the London-based Seraphine Hotel Group and have invested in hotels and hotel sites across Ireland since 2013. Their Dublin projects include the redevelopment of Findlater House on O’Connell Street into a 198-room Holiday Inn Express, which opened in 2016, and a proposed 427-bedroom hotel at Stockhole Lane near Dublin Airport.

Seraphine acquired the Marina Hotel in Waterford in 2016 for a reported €4 million and has since been granted planning permission to add two additional floors, extending the hotel by 1,360sq m to accommodate 46 additional bedrooms.

In Cork, Seraphine has acquired a row of Georgian houses at 31-33 South Terrace for a price believed in excess of the €1 million sought in 2015. It plans to convert and extend the buildings into a 146-room hotel, though Cork City Council refused planning permission in January 2017, referring to the plans as “overdevelopment” and “visually obtrusive”.