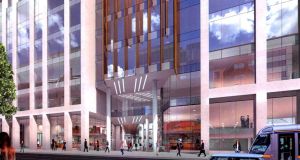 The Clancourt Group plans to once again expand its Park Place office complex in Dublin 2, signalling its confidence in the market following successful lettings at its latest phase, Three Park Place.

The developer has lodged plans with Dublin City Council to build Four Park Place, a top-of-the-range office building that will replace a former telephone exchange building on Adelaide Road.

In 2015, Eircom sold the existing 1970s industrial building to Clancourt for a price believed to be in excess of €10 million, with the telecoms company remaining in situ as tenants until 2019. The developer has now revealed its ambitions to erect a nine-storey office building in its place with a total gross floor area of nearly 22,000sq m (237,000sq ft), including a single-storey basement.

Clancourt’s design team say that if planning permission is granted, the proposed building will deliver public realm improvements by providing a pedestrian link from Adelaide Road to the existing pedestrian plaza that runs between Hatch and Harcourt streets.

The new office building would feature two retail/restaurant units at ground level, adding to Park Place’s existing offering, which includes eateries such as Cocu, Morton’s and Zambrero, which occupy former railway vaults lining the pedestrian plaza that were converted into retail/restaurant units by Clancourt in a previous phase of the development.

Few people will miss the bulky industrial building that is set to be replaced by Four Park Place. In spite of the large scale of the proposed development, only two parties submitted observations to the council and, notwithstanding their various concerns, both were supportive in principle of the site being redeveloped.

The council has sought further information from Clancourt prior to deciding on the application, in part due to an observation made on behalf of developer Johnny Ronan’s Ronan Group Real Estate, owner of the adjoining St James House office building. Ronan expressed concerns that one element of the development might negatively impact upon his building’s future redevelopment potential.

In a further expansion of Park Place, Clancourt has commenced construction at the former Pod nightclub, bought for about €6 million in 2016, which is being converted into a mixed-use building to be known as Station Building Two.

The converted building will house three new retail/restaurant units and about 1,440sq m (15,500sq ft) of office space, which Jim O’Reilly of joint agent Knight Frank (alongside CBRE) says will “strike the perfect balance” given the mix of modern specifications, including raised access floors and air conditioning, and original features such as exposed roof trusses and original stone walls, which afford the offices “unique character”.

The offices will be accessed via a new double-height reception area located on Hatch Street. The three new retail/restaurant units will be located in unused former railway vaults and will feature dual access from Park Place’s existing pedestrian plaza and from Harcourt Street, where a new public plaza is to be built. Practical completion of the scheme is expected in Q4 2018.

Four Park Place and Station Building Two will likely be the final phases of the expansive Park Place complex, which now spans some 1.41 hectares (3.5 acres) of land in all, given that there are few remaining sites in the city block bounded by Harcourt Street, Adelaide Road and Hatch Street.

Clancourt should have ample funds at its disposal to part-fund its new developments following the sale of a number of its investment properties located in the immediate vicinity of Park Place.

On Earlsfort Terrace, the company has disposed of four adjoining Victorian office buildings for about €8.5 million in an off-market transaction, according to accounts filed by a Clancourt subsidiary company. Numbers 15-18 Earlsfort Terrace, which range in size from 321sq m (3,445sq ft) to more than 358sq m (3,862sq ft), were originally offered for rent by the developer in September 2016 following an extensive refurbishment programme.

The properties have been sold to a private investor funded by GreenOak Real Estate, a relatively new arrival to the Irish market that has recently provided funding to a number of leading developers and investors. The new owner has leased all four buildings to Iconic Offices at a rate of about €430 per sq m (€40/sq ft) on a 25-year lease.

In a separate transaction, it is understood Clancourt has sold Blocks 4 and 5 at the Harcourt Centre to Green Liffey Investment, a sub-fund of the Davy Opportunity Trust, for an undisclosed sum. The 5,202sq m (56,000sq ft) office buildings were sold with the benefit of an annual rent roll of €2.17 million and were guiding €50 million through joint agents JLL and Knight Frank last year.

1 Passengers face queuing in car parks at Dublin Airport
2 Major credit union plans to limit savings accounts to €40,000
3 Ikea among major retailers to reopen next week
4 Woodchester founder Craig McKinney dies
5 Brother is dragging his heels as executor of uncle’s will - is there anything I can do?
6 Angela Merkel sweeps in to save the euro zone
7 Revenue tells court it was entitled to raise €1.64bn tax assessment against Perrigo
8 Student accommodation sector set for harsh Covid-19 lesson
9 Cycling made easier with an Irish-made electric bike
10 Avoca wins battle with Monkstown locals over cafe operation
Real news has value SUBSCRIBE