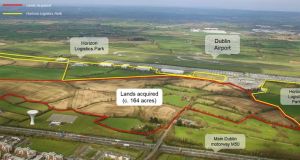 Green REIT to acquire 164 acres adjacent to its existing holding at Horizon Logistics Park at Dublin Airport, for €12.25 million. 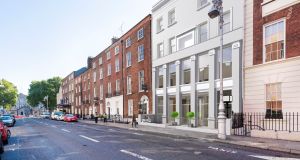 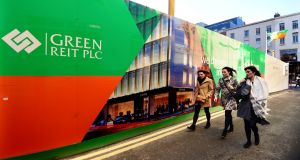 Maples Fund Services, which provides administration and middle office for hedge funds and private equity firms, has agreed to take out a €1.65 million-a-year lease on Green REIT’s newly developed office building at 32 Molesworth Street in Dublin 2, according to sources.

Dublin-listed property group Green REIT said in a statement on Thursday it had agreed to rent the entire 2,973sq m (32,000sq ft) property to an “international business provider”, without naming the company.

Both are affiliates of legal firm Maples and Calder which was established in Dublin in 2006 and currently employs more than 250 people in Ireland, according to its website.

A spokesman for Green REIT declined to comment, while a spokeswoman for Maples Fund Services was not in a position to comment.

This is the first letting of one of Green Reit’s new office developments, which has been delivered on time and on budget, according to the company.

“This letting, which is 14 per cent ahead of our most recent estimates, will enhance our income profile and overall WAULT [weighted average unexpired lease term],” said Paul Culhane, the development director.

“We look forward to securing lettings for our other three office developments, all of which are going to plan. Block H in Central Park in Dublin’s south suburbs, is also due for completion by year end.”

Green REIT also announced it will acquire approximately 164 acres adjacent to its existing holding at Horizon Logistics Park at Dublin Airport, for a total consideration of €12.25 million.

The acquisition, according to a statement on Thursday, should be complete before the end of 2016.

It will bring the company’s total land holding for Horizon Logistics Park to approximately 264 acres.

“The transaction increases the company’s strategic land holding adjacent to Dublin Airport at a time when demand and rental values for well-located modern logistics units are increasing,” the statement said.

Last week, Green Reit’s chief executive, Pat Gunne, said that UK firms looking to move business to the Republic in the aftermath of Britain’s vote to leave the European Union are beginning to actively seek office space in Ireland.

“We are now starting to see companies starting actively to engage in the Dublin market,” said Mr Gunne. He acknowledged, however, that most activity remains purely exploratory and said it was “really too early to call” how much business may move to Dublin from London.

1 Should my mam wait for house prices to drop before buying?
2 Almost 70% of home buyers to purchase within next year
3 Covid-19 mortgage breaks: What’s the catch?
4 Brother is dragging his heels as executor of uncle’s will - is there anything I can do?
5 Covid-19 takeover of private hospitals to cost insurers €180m
6 Dublin drops out of top 50 in ranking of best cities for start-ups
7 Revenue faces US drug company Perrigo over disputed €1.64bn tax bill
8 Consumer watchdog tests face masks to ensure they meet standards
9 Cheers: Conor McGregor's whiskey races up the sales chart
10 Olympic nostalgia a reminder of Eurosport’s big play
Real news has value SUBSCRIBE