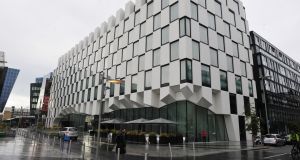 The value of Irish hotel sales last year was the second highest on record, with luxury hotel turnover driving activity in the market.

According to figures from commercial estate agents Cushman & Wakefield, hotels valued at €583 million changed hands in 20 transactions in 2019, up from the €98 million turnover achieved the previous year.

Closing out the year were two of the bigger sales, with the Marker, in Dublin’s Grand Canal, being acquired by German investor Deka Immobilien for about €134 million and the Conrad Hotel being bought by Dutch private equity firm Archer Capital for about €116 million.

Aside from five-star hotel sales, there was plenty of other notable activity, including the €50 million sale of the Portmarnock Hotel and Golf links to Canadian hotel operator Northland Properties and the €45.5 million sale of the Hilton Kilmainham to French real estate group Covivio.

Geographically, 71 per cent of the value of sales was concentrated in Dublin, followed by the east and midlands region, which accounted for 22 per cent of values as a result of the Powerscourt and Druid’s Glen estate sales earlier in the year.

Overseas buyers dominated activity, accounting for 77 per cent of the value of hotel sales.

Development within the Irish market continued apace, with 4,530 rooms under construction at the end of last year. Also in the final quarter, new hotels including the Moxy Dublin and the Mayson Hotel opened their doors.

“2019 proved to be a strong year in terms of transactional levels with a particular strong trend of luxury and Dublin city-centre hotels changing hands. Supply has remained steady with the delivery of approximately 1,300 keys into the Dublin market,” said Isobel Horan, associate director of trading assets at Cushman & Wakefield.