Dispute centres on height guidelines for buildings in Dublin, court of appeal hears 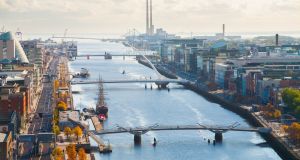 A company of developer Johnny Ronan has urged the Court of Appeal (CoA) to overturn a High Court decision rejecting the firm’s position over building height guidelines.

The dispute centres on whether Dublin City Council was wrong in its interpretation of guidelines about what the maximum height of new Ronan group-built office and residential buildings in the Dublin docklands should be.

Work on the office element – earmarked to accommodate 1,000 workers of US customer relations management company Salesforce – is due to be completed early next year, the court heard.

Permission was recently been granted by An Bord Pleanála following a new separate application for a 548-unit residential element brought under the strategic housing process which bypasses the local authority.

The site is in the North Lotts/Grand Canal area, which is designated as a strategic development zone (SDZ).

Spencer Place Development Company (SPDC), of which Mr Ronan is a director, had sought to build up to 13 storeys in that SDZ.

However, the city council said the SDZ only permits 10 storeys and any increase would have to be on the basis of the SDZ scheme being revised and approval for that is awaited from An Bord Pleanála.

SPDC argued in the High Court the council could already permit the increased height under Urban Development and Building Heights guidelines issued by the Minister for Housing in 2018.

It challenged the council’s legal interpretation of the interaction between those guidelines and statutory planning schemes adopted for SDZs.

The council disputed its claims.

A year ago the High Court rejected SPDC’s arguments. The court said, among other things, the Government guidelines do not supersede the height caps in an SDZ.