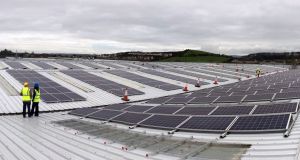 Kingspan Insulation in Castleblayney, Co Monaghan installed the then largest rooftop solar pv system in Ireland, of 300kW, in 2015 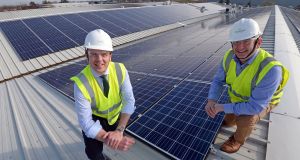 Joe O’Carroll and Mark Lowen of Gaelectric Energy Solutions, with their solar roof installation on the roof of the Butlers Chocolate factory at Coolock, Dublin. Photograph: Eric Luke

Could rooftop solar electricity generation catch on in Ireland and give commercial property owners a chance to add value to their assets while slashing energy costs?

Big-box retailers Walmart and Target, for example, are leading the solar charge stateside: the latter plans to add rooftop solar panels to 500 stores by 2020; the former had 142 megawatts of installed solar capacity as of 2015 and is chasing a 100 per cent renewable power goal. Stanford professor and entrepreneur Tony Seba even estimates that if Walmart matched Ikea’s solar installation rate in the US, it would possess the generation capacity of four nuclear stations.

Interestingly, Walmart is now deepening its strategy for solar energy through trialling the use of batteries to store excess power generated during the day. This is then used at night or to meet peak demand – and in the process shave its energy bills still further.

Solar energy is no longer a “coming” technology: it already accounts for 7 per cent of power generated in Germany, a country at a similar latitude to Ireland. In many parts of the world it is now far cheaper to generate electricity from solar than fossil fuels. It is essentially a digital technology and, just as the power of computers is increasing exponentially, so is the output of solar panels. At the same time, the cost of manufacturing them is typically falling by 5-10 per cent per annum.

The disruptive cost and technological momentum behind solar is now posing an existential threat to traditional power utilities and oil companies. Mr Seba, for example, believes it will all be over for fossil fuels by 2030.

Bord Gáis says solar is becoming “more and more cost-effective”, and Kingspan ESB, a joint venture between the ESB and solar panel manufacturer Kingspan, now offers “Funded Solar”. This allows businesses to install a state-of-the-art solar photovoltaic (pv) system to generate electricity, which is then sold back to the property owners at discounted rates.

Funded Solar’s no-money-down model means property owners can make productive use of otherwise idle roof space at no upfront cost to themselves.

And Irish companies are moving into this space. Kingspan Insulation in Castleblayney, Co Monaghan installed the then largest rooftop solar pv system in Ireland, at 300kW, in 2015. Gaelectric has commissioned an even larger 420kW system at Clonshaugh in Dublin.

This latter project, at the Butlers Chocolates HQ, involved installing 1,585 solar panels over eight weeks, and these will provide 19 per cent of the company’s daytime electric load. It is essentially an exemplar project by Butlers and Gaelectric to demonstrate the possibilities of solar in the Irish market. An installation of this scale would typically cost about €500,000 and, without a generation tariff to sell electricity back to the grid, the payback period would be about 10 years.

Butlers is part of the Origen Green programme, which is all about increasing the green agenda in the food industry. The solar installation meets many of its long-term goals in the area.

According to Gaelectric’s Daire Friel, the Butlers factory could easily have accommodated a solar array of more than 1MW but, as there is no agreed system for selling electricity from such systems back to the grid, its output had to be limited in size to the factory’s lowest power load.

“The Butlers solar project will still generate 19 per cent of Butlers’ daytime electricity over the year and will be particularly useful during the summer to cool the factory which must be kept at a constant low temperature,” says Mr Friel. “Rooftop solar is very easy to put in place and, realistically, buildings could generate more power than they need at times and could provide this energy back to the grid.”

He says that if building owners were rewarded for selling solar electricity back to the grid (the so-called REFIT tariff, due to be set early next year), “we could quickly install 500MW of solar projects. This tariff is justified as the more renewable energy that is generated in Ireland, the lower the fines will be for missing the State’s EU emissions targets.

“A tariff of 7-8c/kWhr would allow Gaelectric and others companies to offer customers with large commercial rooftops energy supply contracts. Under such a contract, the installation and operation of the system would be managed by Gaelectric at no capital cost to the customer. Gaelectric would offer the electricity to the customers at up to 20 per cent reduction over their current day rate.”

“This is due to the fact that there is significant daytime on-site energy demand, large roof areas allow for economies of scale, and many commercial entities have a demand for decarbonisation,” he says. “Rooftop solar pv has minimal visual impact, no noise impact, and no transmission and distribution infrastructure required. It can be installed quickly with zero interruption to the business and utilises otherwise vacant roof space.”

Since forming in 2015, Kingspan ESB has focused on Northern Ireland, where rooftop solar pv is supported through the Renewable Obligation scheme, which makes these systems commercially attractive. Kingspan is now increasingly turning its eyes south of the Border.

“In the immediate term, rooftop solar pv in the South will require some support through the forthcoming renewable electricity support scheme,” says Mr Sharkey. “But, in the medium term, as installation costs fall and electricity prices increase, rooftop pv will be attractive without any types of support. Some early-mover projects are already happening, albeit with longer-term paybacks.”

Cormac Mannion, energy services manager at Energia, says the cost of installing renewable energy sources has “plummeted” in the last few years and that “we are now seeking a scenario where a solar pv installation will pay for itself within six to seven years.

“While this may seem like a long time for many businesses, the key advantage is that it can act as a hedge against a scenario where energy prices rise. That in itself makes the proposition far more attractive.”