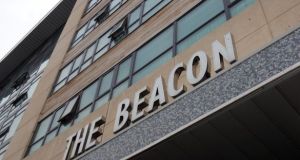 The Beacon Hotel in Sandyford

The owners of the Beacon Hospital are closing in on the acquisition of the neighbouring Beacon Hotel at Sandyford in south Dublin.

The deal, which is expected to be concluded shortly, follows several months of negotiations between the parties. The Irish Times understands discussions in relation to the hotel’s potential sale were prompted by an unsolicited approach from Beacon Hospital chief executive Michael Cullen to the MHL Hotel Collection, the luxury hotel group owned by US billionaire John Malone and Irish partners, John Lally and Paul Higgins.

Contacted for comment on the matter, a spokesman for MHL said: “Given its smaller scale, suburban location and limited scope for expansion the Beacon Hotel was never a strategic acquisition for MHL and was acquired in 2016 as part of a package with the Spencer and Morgan hotels. We have since added 40 bedrooms to both the other hotels but saw no opportunity for expansion at the Beacon.”

And while Michael Cullen declined to make any comment on the deal, the imminent acquisition by the Denis O’Brien-owned hospital of the Beacon Hotel will offer it scope, subject to planning permission, to grow its operations significantly.

The Irish Times understands the redevelopment of the south Dublin hotel could see the Beacon Hospital increasing its current capacity by 40 per cent to 250 inpatient beds, along with the expansion of key services and departments. The Beacon Hospital’s overall investment, including the purchase of the hotel, is expected by sources to amount to around €75 million. That figure comes on top of the €70 million the hospital has invested in recent years to enhance its services, equipment and facilities.

The planned expansion of the Beacon would consolidate its position as the largest private hospital in Dublin. Since being opened in 2006, the Sandyford facility has grown its employee headcount from 140 to 1,400 people with 300 consultants. The hospital has increased its staffing levels by 18 per cent in the last 12 months and expects to create about 400 new permanent jobs once the expanded hospital opens.

Recently accounts filed by Beacon Medical Group Sandyford Ltd showed that operating profits at the hospital group last year (2019) more than doubled to €7.2 million. This followed revenues at the Hospital Group increasing by 16 per cent to €142.53 million from €122.66 million. The hospital’s earnings before interest, tax, depreciation and amortisation last year increased by 43 per cent to €17.1 million.