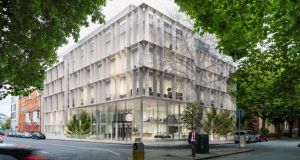 The soon-to-be-built Cadenza building which is to be Intercom’s new home.

Irish-founded technology company Intercom is to move into new headquarters on Earlsfort Terrace in Dublin.

The company, which is currently based in Anglo Irish Bank’s former headquarters on St Stephen’s Green, has this week signed a deal to lease more than 113,000sq ft (10,500sq m) for the new Cadenza building, which is to be located close to the National Concert Hall.

The tech company has agreed an 18-year lease with Irish Life at a rent of €60 per square foot. It is expected to move into the new building in January 2022.

“Dublin has been core to the Intercom story. We started as Dubliners in Dublin with all of our initial technology built here. We’re thrilled to find a new home in the city that will let us double down here and expand our Dublin operations even further,” said chief executive Eoghan McCabe.

Designed by Henry J Lyons Architects, the building, which has yet to be constructed, will be located at the junction of Earlsfort Terrace and Adelaide Road. It will have a unique facade incorporating a fully glazed inner skin behind a limestone veil. In addition, it will also have a double-height curved glazed reception area located on the prominent corner which defines the entrance.

“The pre-letting of Cadenza is very significant for Irish Life, particularly as construction has yet to commence,” said Deirdre Hayes, Irish Life’s head of property asset management.

Intercom, which was founded by Mr McCabe, Des Traynor, Ciarán Lee and David Barrett in 2011, announced plans to significantly expand the business early last year, with a move to double staff numbers to more than 800 people globally. It currently employs about 600 people, of whom 250 are in Dublin.

The Dublin- and San Francisco-headquartered company achieved unicorn status last year after raising $125 million to take its valuation to more than $1 billion.

Intercom, which claims more than a billion end users, has developed a software platform which brings messaging products for sales, marketing and customer support together. Its products allow companies to communicate with customers easily through their own websites, inside their respective web and mobile apps, and by email. Clients include Aer Lingus, Scottish Power, Eurotherm, Atlassian, Shopify and New Relic.

Mr McCabe said its new home would “fuel Intercom’s future growth as it further expands its teams in Dublin and globally, continues to invest in its core Messenger and AI technology, and brings business messaging to the masses.”

This is the second pre-let Irish Life has secured in the last six months. It has transacted close to 500,000sq ft in office lettings this year with another 500,000sq ft currently in the development pipeline.

The latest publicly available accounts for Intercom show its Irish unit recorded $61.5 million in revenue in 2017, up from $33.1 million a year earlier. Pretax losses were unchanged at $22.4 million on the back of aggressive spending by the company on research and development activities.