Online retailer said to be scouting sites with about 100,000sq ft of space 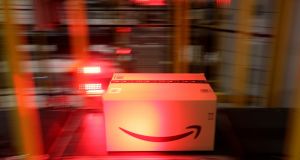 Amazon is seeking its first warehouse in Ireland to fulfil orders currently shipped from the UK, according to sources. The move comes as UK prime minister Boris Johnson prepares to lead the UK out of the European Union.

The online retailer is scouting sites with about 100,000 sq ft (9,290 sq m) of space and has evaluated options on the outskirts of Dublin, the sources said. No deal has been agreed and there’s no certainty any lease will be signed, they added.

Irish property investors including Green Reit, which was acquired by private equity firm Henderson Park last month, and Iput have been investing in Dublin warehouses and land for industrial development betting Brexit could amplify already strong demand for logistics properties.

Large retailers including Amazon and Marks and Spencer ship goods to Irish customers from warehouses in the UK. That leaves them vulnerable if the UK fails to agree a deal that would ensure the smooth movement of goods across the Irish Sea when it leaves the EU.

Amazon has sought to cut delivery times by rapidly expanding its portfolio of warehouses close to big cities. That’s helped drive rents and values higher for industrial property across Europe.