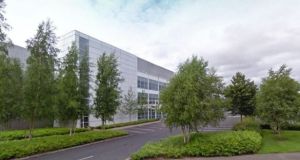 The portfolio consists of 141,000 sq ft of modern offices over six buildings at Millennium Park in Naas

This represents a net initial yield of 5.8 per cent after accounting for purchase costs, the group said.

The portfolio is expected to have reversionary potential in excess of 9 per cent, Yew added.

It consists of 141,000 sq ft of modern offices over six buildings, as well as 773 carparking spaces and a six acre greenfield site. Five of the office buildings are tenanted by foreign direct investment and large Irish enterprises, with one of the buildings currently vacant.

Yew Grove specialises in office and industrial properties primarily outside Dublin’s central business district that can be leased to State entities and State-backed firms. On completion of the Millennium Park deal it will have a portfolio of 28 properties with a proforma gross asset value of €140 million and a current annualised rent roll of €10.4 million.

The reit recently announced a successful placement of 26.6 million shares, raising gross proceeds of €25.8 million. This was the second tranche of its share issuance programme launched earlier this year which gives it the ability to issue up to 100 million new shares.