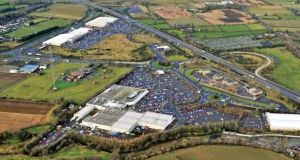 The Sprucefield park’s tenants include large UK multiples, such as Marks & Spencer, Boots, Next, Pets at Home and a Mothercare outlet that is slated for closure.

Intu, a listed UK owner of shopping centres, has sold Sprucefield retail park in Lisburn, Co Down, for £40 million (€46.7 million), more than 40 per cent below the price it paid for it just five years ago .

The retail park, located just off the M1 motorway about 10 miles from Belfast city centre, has been bought by another listed outfit focused on UK retail assets, NewRiver REIT.

In a statement released to the market on Monday morning, Intu’s chief executive, Matthew Roberts, told investors the disposal was part of the group’s new strategy to sell off some of its assets to cut debt.

Large UK retailers such as Argos, B&Q and Sainsbury’s are among the tenants at Sprucefield park’s five units.

Including the Lisburn deal, Intu has disposed of £268 million (€314 million) worth of its assets so far this year.

Intu had been planning an expansion of the park that it bought for £70 million (€81.9 million) in 2014 from Westfield, but it faced some local political opposition over concerns that it would leech retail custom away from Belfast city centre.

A note on Monday morning from Dublin stockbrokers, Goodbody, said the cut-price sale of Sprucefield “highlights further the dramatic erosion of value in the UK retail park segment”.

1 What is Covid Tracker Ireland?
2 Why gift a son now if it eats into his tax-free inheritance threshold?
3 Holiday home rental company exits Irish market
4 High Court refuses Denis O’Brien application for discovery of documents
5 Copper Face Jacks pays out €45.95m in dividends to owner
6 SuperValu and Centra MD Martin Kelleher stepping down
7 Will family’s tax debt stop me getting my inheritance?
8 Ireland’s economy set to shrink 8.5% due to pandemic
9 Where is the creative, effective advertising for face masks?
10 Spar-owner BWG explores potential for online shopping ‘pot of gold’
Real news has value SUBSCRIBE