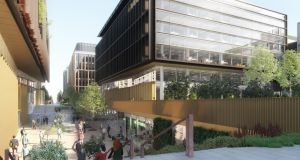 Kennedy Wilson has submitted a planning application for over 390,000sq ft of office space in Dublin’s north docklands.

The proposed office accommodation forms part of a wider mixed-use campus to be known as Coopers Cross, which the US-headquartered real estate company intends to develop on a 5.9-acre site to the rear of the Central Bank’s headquarters on North Wall Quay.

The development will also include what the promoters are describing as a “multi-functional town hall space”.