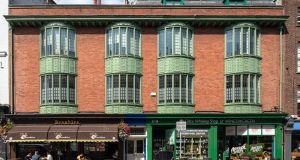 Investors looking for a prime opportunity in Dublin city centre will be interested in a high-profile retail and office investment which has been brought to the market at a guide price of €4.75 million.

Numbers 26 to 28 Dawson Street is an instantly-recognisable and architecturally-significant property. Located at the St Stephen’s Green end of what has become the capital’s most sought-after thoroughfare for office, restaurant and retail occupiers, the building, which dates from 1910, was designed by the renowned architect George Patrick Sheridan(past president of the Royal Institute Of The Architects Of Ireland).

The double-fronted, four-storey over-basement building was commended at the time of its construction by Irish Builder magazine as “a remarkably good example of clever planning of offices with excellent lighting”. The decorative panels to the front elevation were cast in lead off-site and may comprise the earliest Irish example of curtain walling.

Today, the subject property is fully let and producing a combined annual rental income of €221,201 from a number of tenants, including The Celtic Whiskey Shop, Beanhive Cafe and Davy Hickey Properties. The tenants are not affected by the sale.

The guide price of €4.75 million equates to an income yield of 4.3 per cent after purchaser’s costs.

Gavin Brennan, who is handling the sale on behalf of HWBC, said: “This is a great opportunity to acquire a fine investment on one of the most sought-after streets in Dublin. Dawson Street has undergone major rejuvenation in recent years, enhancing its appeal to tenants.”