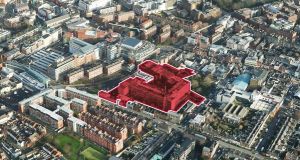 DIT’s former Kevin Street campus in Dublibn is well-located, being just 300m from the Luas stop at St Stephen’s Green

It is understood that Westridge will now press ahead with plans to seek planning permission for a major mixed-use scheme on the 3.57 acre site, comprising mainly Grade A office space alongside a large element of private rented sector (PRS) apartments, and food and beverage offerings.

Westridge’s acquisition of the Kevin Street portfolio was backed by a number of New York-based high net worth family offices. Debt finance for the deal was provided by Fairfield Real Estate Finance led by Chris Wilson and BentallGreenOak which was led by its Dublin-born vice-president Allen Crampton.

While the figure paid by Westridge Real Estate represents a premium of 75 per cent on the €80 million price guided by Knight Frank when they brought the property to the market last February on behalf of DIT’s successor, Technological University Dublin, the site is acknowledged as being one of the best redevelopment opportunities to have been offered for sale in the capital in recent years. The former DIT campus is located just 300m from the Luas Green Line stop at St Stephen’s Green, and sits within walking distance of the city centre.

The sale of the site was brokered by Evan Lonergan of Knight Frank.

A feasibility study prepared by architects O’Mahony Pike in advance of the sale of the Kevin Street campus suggests it is capable of accommodating one or other of two mixed-use schemes that would extend to 51,000sq m (548,959sq ft) and 53,000sq m (570,487sq ft) respectively. In terms of the site’s potential office component, it is understood inquiries have come from a number of prospective occupiers already.

It is understood Westridge’s US backers are keen to partner and support the company with further acquisitions in the near future.

Prior to establishing Westridge Real Estate, Shane Whelan had been development director with RGRE. Before that, he worked for a number of years as a senior asset manager with Treasury Holdings, the property group Johnny Ronan and Richard Barrett headed up prior to the global financial crisis.