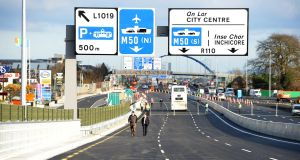 The acquisitions at Newlands Cross would “greatly increase the potential opportunities” for Hibernia at the enlarged site. Photograph: Eric Luke/The Irish Times.

Property investment company Hibernia Reit has acquired two parcels of land at Gateway/Newlands Cross, bringing its total interest in the area to 143.7 acres.

The investment company is to pay €27 million for 92.5 acres it is acquiring from the Irish Rugby Football Union (IRFU), and €1.7 million for 5.8 acres from a separate party.

The IRFU will be entitled to an additional payment if the land is re-zoned from agricultural use in the next 10 years.

The site in question was once examined as a possible location for a new stadium developed for the IRFU and the Football Association of Ireland (FAI) before Lansdowne Road was ultimately chosen to be redeveloped.

Richard Ball, chief investment officer of Hibernia, said it is “delighted” to have agreed these acquisitions, which take Hibernia’s total holding in the area to 143.7 acres.

“The land is located within eight kilometres of Dublin’s city centre and benefits from excellent transport infrastructure, including the Luas Red Line and the M50 and N7 motorways. It is an ideal candidate for mixed-use development, including a large element of infill residential.”

The land is currently zoned for agricultural use. However, if the land acquired from the IRFU is re-zoned in the next 10 years, then the rugby union will be entitled to an additional payment equating to 44 per cent of the market value of the lands at that date, less what Hibernia Reit has already paid for it.

In a note to investors, stockbroker Goodbody said the land was zoned for agricultural use, though is considered to be of strategic importance for future residential, and possibly commercial development given its location.

“With direct access to Dublin city centre in less than 20 minutes by light rail, as well as easy access to major employers, including the new under-development National Children’s Hospital which will be less than 12 minutes away, this would be an in-demand rental location and, given the scale, could tempt in institutional and housebuilding joint-venture partners,” it said.

“The primary acquisition was for 92.5 acres from the IRFU for an initial consideration of €27 million.

“This is an initial payment as, if these lands are re-zoned within the next 10 years – which is likely given the new South Dublin County Council development plan is to be prepared by 2022 – the IRFU will be entitled to an additional payment of 44 per cent of the zoned market value of the lands less the initial payment of €27 million. The second, smaller land purchase was for 5.8 acres from a separate vendor for €1.7 million.”

Separately, Investec said the acquisitions would “greatly increase the potential opportunities” for Hibernia at the enlarged site, although, given that the acquired land (and two-thirds of its existing holdings) is zoned for agricultural use under South Dublin County Council’s Development Plan (2016-2022), “it will be some time before these opportunities come to fruition,” said economist Ronan Dunphy.

“The site is excellently located, being bounded to the north by the N7 [the primary route to the south-west of the country out of Dublin] and very close to the orbital M50 motorway and the Luas, the city’s light-rail network. This should provide Hibernia with a range of development options in due course.

“The group reports first half results tomorrow which we expect to show good progress on asset management and developments, and we continue to believe that the double-digit discount provides a buying opportunity.”

1 Irish company paid €1.2m a year by collapsed Blumenthal-linked Australian restaurant
2 Hugo MacNeill steps back from Goldman Sachs role
3 Why bosses should not be afraid of speaking out on Instagram
4 Hammerson appoints lead for move into housing
5 Should AIB compensate me for upsetting letter on arrears?
6 Irish economy to grow by 3.4% this year, predicts EY
7 Tax shifts won’t drive multinationals out of Ireland - Moody’s
8 ‘Germans are very efficient and reliable. Cancelling is alien to them’
9 Poll on second election, concerns over Irish pension gap, and Ireland’s rich list
10 Setback for Tullow Oil as it plugs a well off the coast of Peru
Real news has value SUBSCRIBE