Purplebricks says it continues to grow in challenging market 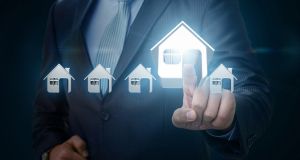 British online estate agent Purplebricks Group said on Tuesday it continued to grow in a “challenging” UK housing market that highlighted weaknesses in both traditional and online agents’ business models.

The company, which recently pushed into Germany via a joint venture with German publisher Axel Springer in October, however, reported a 20 per cent rise in first-half revenue growth in the UK.

The online broker, which operates in Britain, Australia, the United States and Continental Europe, said it remains on course to meet its full-year revenue guidance of between £165 million (€188 million) and £185 million , with its Canadian business performing in line with expectations.

Many companies in the British property sector have faced heavy losses due to higher property taxes, Britain’s impending exit from the European Union and lower household spending, pinched by inflation that has risen faster than pay.

Purplebricks, however, has enjoyed revenue growth, helped by its low-fee model of local experts who provide valuations and online systems that handle selling and buying of properties.

Traders saw shares in the company rising as much as 10 per cent at open. – Reuters