Hearing on application brought by Quinn receivers is adjourned 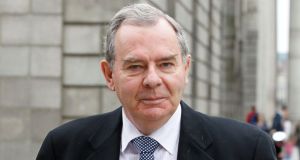 A hearing to decide if members of bankrupt businessman Seán Quinn’s family have adequately explained 67 transactions involving movement of substantial sums between national and international accounts in 2011 and 2012 has been adjourned on consent.

The adjournment is to see if outstanding issues between the Quinns and receivers appointed over their accounts and assets can be resolved via correspondence rather than the substantially more costly exercise of court applications.

Receivers Declan Taite and Sharon Barrett had brought an application after alleging the Quinns had failed to fully comply with orders of February last requiring them explain 67 transactions and why a laptop of Aoife Quinn’s husband, Stephen Kelly, was devoid of data.

The receivers sought those explanations in the context of an earlier application by the Quinns permitting variations of freezing orders imposed on their accounts since July 2012 for purposes including payment of tax and other bills.

Earlier this month, the receivers claimed explanations provided in a letter of May 8th for some of the 67 transactions lacked “any real credibility” and applied for the Quinns to swear those explanations on affidavit. The Quinns, who insisted they had provided full explanations and had co-operated, provided that affidavit.

When the matter returned before Mr Justice Peter Kelly yesterday, he was told by Michael Collins SC, for the receivers, that progress had been made but the receivers still had concerns.

The Quinns had provided 5,511 documents they considered relevant and 277,411 documents they considered irrelevant and the receivers wanted to see if some of the latter were relevant. While he accepted many of the latter category included photos and other personal material, Mr Taite had asked if there was a photo of a Russian document, Mr Collins said.

Charlotte Simpson, for the Quinns, said they had spent four days with Mr Taite in an office while he went through documents, they answered all queries put to them and were never asked any question about a photo of a Russian document.

Mr Collins said Mr Taite was not complaining about the Quinns “cordial” attendance, but that examination was “a drop in the ocean”, given the vast number of documents to be gone through. Part of the receivers’ application was for two solicitors and three people from the receivers’ firm to assist in that exercise.

Ms Simpson said the Quinns would agree to that provided the solicitors were not involved in the separate litigation by the family against IBRC.

Mr Justice Kelly said the sides had agreed to adjourn because the process to decide what remained at issue between them was continuing.

Earlier this month, Ms Simpson told the judge the Quinns “strongly and strenuously” denied allegations made to IBRC by unidentified informants that instructions were provided for the movement of some €500 million in Quinn assets beyond the bank’s reach.