Goodman builds stake in Green Reit as it courts bidders 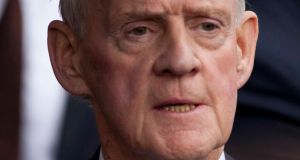 Beef magnate Larry Goodman has been building up a stake in Green Reit in recent weeks, as the Dublin-listed property company courts bidders after putting itself up for sale in April.

Stock exchange filings show that an investment company controlled by the businessman’s family, Vevan Unlimited, had accumulated a 2.14 per cent stake, valued at €27.3 million, by Tuesday. Vevan disclosed late last month that it had breached the 1 per cent level that shareholders are obliged to disclose their hand under takeover rules.

While it is not known when the Goodman investment company acquired its original 6.6 million shares in Green Reit, subsequent share-buying has been taking place at prices between €1.80 and €1.81.

The prices that the Goodmans have been willing to pay for the Green Reit shares in recent weeks are within a whisker of the €1.83 per share at which the property company valued its assets on a net basis at the end of December. That would appear to limit the potential for Vevan to make gains from the sale of Green Reit shares in a takeover situation.

A spokesman for Mr Goodman declined to comment on the share purchase or speculation that he may be seeking to muscle in on the sale process.

The Irish Times first reported in May that Californian real-estate company Kennedy Wilson and Irish Life were working on separate bids for Green Reit. Both submitted initial proposals before a deadline of June 12th and count among four parties to have made it through a second round.

Reports elsewhere have suggested that Canadian investment group Brookfield and German funds are among interested parties. The deadline for second-round offers is July 25th.

The company shocked the market when it announced on April 15th that it had decided to sell itself or its portfolio, as its share price “has been subject to a material and persistent structural discount to its net asset value per share over three years now”.

Green Reit, co-founded by property veterans Stephen Vernon and Pat Gunne, said in a trading statement on June 24th that it was “pleased” with how the sale process was proceeding and the level of interest expressed in the company to date.