Foxhunter pub between Lucan and Palmerstown back on market 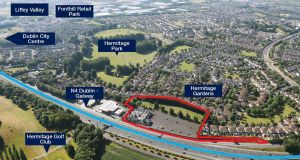 The former Foxhunter pub in Lucan is on the market through agent Savills and, while there’s no official guide price for the property, it could achieve about €3 million – a long way off the €17 million it sold for at the height of the boom in 2007.

It sits on a 3.1-acre site with 127 metres of frontage to the N4 between the villages of Lucan and Palmerstown.

The agent suggests the property will interest retailers, forecourt operators, food and beverage providers, and speculators. In addition to retail, its zoning also allows for a motor sales outlet and offices of less than 100sq m (1,076sq ft).

There could also be interest from developers looking to redevelop the site for residential, given that it borders The Hermitage estate to the south and west.

However, this would require a change of zoning and suggests a medium- to long- term development horizon.

Nevertheless, planning permission was granted in 2006 for the construction of 14 houses in its grounds, but the development never went ahead and permission lapsed.

To the east of the site is a petrol filling station and the northern boundary has frontage to the slip road off the N4.

On the opposite side of the N4 is The Hermitage golf club.

The Foxhunter closed its doors in 2012 five years after it was bought by Select Retail Holdings, a consortium that included property developer Bernard McNamara and retailer Simon Burke, for about €17 million with an eye to redeveloping it for retail and apartments.

After closing, it was in the hands of receiver Tom Kavanagh before being sold to Avoca in 2014.

The upmarket cafe and lifestyle empire announced plans for a new outlet there in 2014, which would primarily have been used as a food market.

It was supposed to open in spring 2015 after a €3.7 million investment and employ 50, but that plan was abandoned.