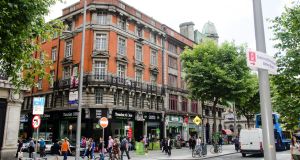 The corner of O’Connell Street and Sackville Place, Dublin

The company led by businesswoman Deirdre Foley, which recently sold the former Clerys department store in Dublin’s O’Connell Street to Europa Capital for a figure believed to be about €63 million, is to offload a large block of retail, office and licensed properties in the city centre.

Joint agents Lisney and Knight Frank are guiding in excess of €13 million for seven properties in O’Connell Street, Abbey Street and Sackville Place following a number of off-market approaches to the owners. The buildings have a substantial footprint extending to 3,716sq m (40,000sq ft) beside the Luas cross-city stops.

The entire portfolio currently produces revenues of €518,279, with 55 per cent of the floor areas vacant.

The collection of buildings is led by two adjoining high-profile commercial blocks on Lower O’Connell Street, which are laid out as four retail units with overhead office space and an overall floor area of 1,880sq m (20,235sq ft). The shops are occupied by Londis, Dublin Tourist Office and PaddyWagon Tours. The upper floors are served by lifts but are presently vacant.

The selling agents said there are opportunities to upgrade the existing buildings and scope to add additional space as part of a substantial redevelopment, subject to planning. The relaxation of height restrictions in Dublin city should make this a more compelling option, they said.

The sale also includes adjoining buildings at 4 and 5 Lower Abbey Street, which are partially let to Ladbrokes Bookmakers and Madigan’s public house. The two buildings have an overall floor area of 696sq m (7,500sq ft), but here again the upper floors are not used.

The collection is completed by adjoining properties on Sackville Place, including a bar, hair salon, dance studio and a vacant two-storey building. The smallest building is the former Sackville Lounge, which the selling agents called a “charming public house which is bound to attract interest from the licensed trade looking to get a foothold in this rapidly developing location”.

The Sackville Place buildings have an overall floor area of 1,068sq m (11,500 sq ft) and are across the street from Clerys, which is shortly to be developed by Europa Capital as a top-class facility extending to 31,956sq m (344,000sq ft) with retail, offices, and restaurants as well as a 200-plus bedroom hotel.

In addition to the Clerys redevelopment, Sackville Place will also benefit from the completion of a new 158 bedroom hotel for the Marriott-backed Moxy Hotel brand, which is due to open in 2019.

Lisney and Knight Frank said the sale was likely to appeal to both the local and international investor/development markets because of the potential to either upgrade the upper floors for offices, education or residential use, or for a comprehensive redevelopment of the various blocks.