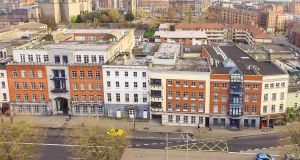 The five office buildings for sale on Merchants Quay, Dublin

Five adjoining modern and period office buildings on Dublin’s Merchants Quay, directly opposite the Four Courts, are to be offered for sale on the instructions of Nama.

Ross Fogarty of agent Knight Frank is guiding in excess of €25 million for the mixed portfolio, which is 87 per cent occupied and producing a rental income of €2.112 million. The investment will show a net initial return of 7.80 per cent.

Because of the close proximity to Dublin’s legal quarter, the tenants in the buildings include a number of solicitor firms, barrister chambers and the Courts Service, as well as BDO, HSE and Dublin City Council.

The overall development extends to more than 10,000sq m (108,000sq ft) and will inevitably achieve a higher valuation through upgrading the office space and finding tenants for vacant units.

The buildings about to change hands are Merchants Hall, Merchants Court, Marshalsea Court, Merchants House and Bond House. Tenants also have the use of 180 spaces in a multistorey car park accessed from Cook Street.

Merchants Court, a four-storey office building completed in 1987, has a floor area of 1,404sq m (10,861sq ft). It has small offices laid out in a mall format with units fronting a central corridor and natural light provided by a glazed atrium. The rental income is €126,110, with four of the office units let on long leases at a nominal rent.

While the car park has 220 spaces, some of them have been sold on long-term leases, leaving around 180 available to the office complex. There are also 10 spaces available at the rear of Bond House.

According to Fogarty, the passing rent works out at only €22.50 per sq ft, including car parking, and with scope to increase the income by letting vacant space there is potential to push the overall income to more than €3 million per annum.