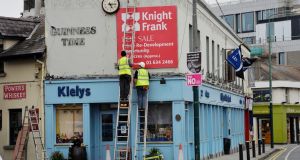 The beloved watering hole of Dublin 4’s rugby-loving denizens is for sale and its most famous – and most barred – patron has spoken of his devastation at the news.

Kielys of Donnybrook has gone on the market with its owners Pat and Mary Cremin deciding that, after 30 years of pulling pints, it is time to sell up and give their children a “shot at living their own lives”.

In a posting on the pub’s Facebook page, the couple confirmed their decision.

“Yes it’s official folks Pat and I have decided to retire and we are giving our four wonderful children their shot at living their own lives,” the post, written by Mary, said.

Yes, it's official. Mary and Pat are selling @Kielysdonnyb. I am devastated today. Such wonderful hosts. Borred me many times over the years but always let me back in. It really is the end of an era. Anyone interested in putting together a consortium? https://t.co/klLblst510

“It took a lot of soul searching to make this decision as we have had 30 wonderful years in Donnybrook and made lifelong friends not just in Ireland but across the world.” She thanked everyone for their support and “especially our hard working staff”.

The good news for those who have frequented the pub over the years is that the shutters have not yet come down for good.

“It’s not goodbye yet as we expect to be around for several months, so drop in for a chat,” she said.

While Kielys has long been a popular haunt among Donnybrook locals, and Leinster Rugby supporters in particular, it is has become an Irish pop culture icon as a result of its staring role in the life of Ross O’Carroll Kelly.

In 2014, he was honoured with a plaque erected over the urinals in the gents toilets which reads: “This plaque has been erected in honour of Ross O’Carroll Kelly who hit and missed here for many years.”

The failed rugby player was quick to take to Twitter once he heard the news. “I am devastated today,” he said. “Such wonderful hosts. Borred me many times over the years but always let me back in. It really is the end of an era. Anyone interested in putting together a consortium?”