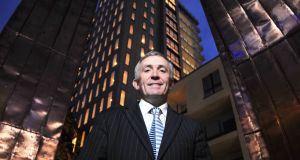 Ireland’s tallest building will change hands for up to €95 million after competition regulators approved its sale on Friday.

The Competition and Consumer Protection Commission approved the deal on Friday, paving the way for it to go ahead.

The commission investigated the sale to ensure that it would not damage competition before approving it.

The mergers’ regulator said that it believed the sale would not “substantially lessen competition in any market for goods or services in the State”.

Kennedy Wilson’s purchase of the Elysian marks its first significant step outside Dublin, where it owns more than 1,000 apartments.

Developer Michael O’Flynn’s group, O’Flynn Construction, spent €100 million building the Elysian, which was completed in 2008, just as the property market was collapsing.

Blackstone sought bids for the tower last year. The private equity fund took over the Elysian in early 2014 in an agreement resolving a dispute with the O’Flynn group, which continued to manage the property.

Blackstone paid the O’Flynn Group a further €5 million to complete a fit out of some of the landmark block’s apartments in 2016.