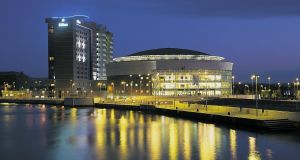 CBRE’s NI Marketview for the first quarter of 2018 shows that the investment market has been “relatively quiet with limited deals completing” during the first three months of the year.

But the weak pound has helped fuel some transactions in the North according to the CBRE report which highlighted that the confirmed sale of the The Quays Shopping Centre in Newry – to an undisclosed buyer – as evidence of the continuing strength of “ongoing local and cross-Border trade”.

The property consultants also said Border locations including Derry, Newry and Enniskillen had performed well in relation to the retail warehouse sector while in Belfast during the first quarter of the year there had been a rush of food and beverage property deals with Costa Coffee, Tim Horton and Caffè Nero all opening new locations in the city centre.

Although the investment market may have been muted CBRE’s latest report points to strong occupier demand particularly in relation to office and industrial warehouse property in the North during the three months to March.

CBRE said the North’s hotel market is also continuing to expand with the Maldron Hotel on Brunswick Street the first of a number of new hotels scheduled to open in Belfast this year and there are also a number of other new hotel development projects under way outside of the city, particularly along the north coast.