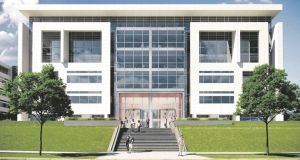 While an office environment might not be the ideal place to be right now or in the weeks and months ahead, as an asset class, it remains one of the main choices for funds and institutions looking for a relatively strong, stable and long-term return on their investment.

That was certainly the case in 2019, according to the Dublin Office Investment Market Report, which is due for publication on Wednesday by BNP Paribas Real Estate Ireland (BNPRE). Compiled in conjunction with MSCI, the report finds that the office sector accounted for more than 40 per cent of total turnover from an investment perspective last year. Some 310,000sq m (3,336,812sq ft) of office space was taken up across the capital in the 12 months to the end of last December.

And while total Dublin office returns dropped to 5.9 per cent in 2019 from the 9 per cent recorded the previous year, BNPRE notes that performance as being “relatively strong when compared with other investment classes” within the context of the continuing low interest rate environment.

Looking at rental growth, the report finds that prime rents in Dublin’s core central business district (CBD) stabilised in 2019 as supply came into line with demand.

Even as the city centre recorded minimal rental growth however, BNPRE Ireland’s head of research, Kate Ryan, points out how Dublin’s south docks area registered an above-average increase of 2.1 per cent in 2019 as the delivery of new office stock enhanced its appeal for both investors and occupiers. Overall, the report finds that office rents across the capital increased by 1.7 per cent last year compared with 1.8 per cent in 2018.

The growth in popularity of non-CBD and suburban locations, including most notably the Sandyford Business District (SBD), saw these areas emerge as the top performers of the Dublin office market last year.

Among the more significant deals recorded there were Facebook’s leasing of 15,979sq m (171,996sq ft) at the refurbished Nova Atria South Building, and Google’s agreement to take more than 7,000sq m (75,000sq ft) in Block I at Central Park. Sandyford has recorded a strong start to 2020 meanwhile, following Mastercard’s decision to locate its new European technology hub across 325,000sq ft at One, Two and Three South County. The agreement represents the biggest letting to have taken place to date in Dublin’s suburban office market.

Income returns became a key driver of growth in 2019 according to the report, with the overall Dublin office market recording a total return of 4.7 per cent to year-end. This represented a slight increase relative to 2018 when the income return was 4.5 per cent. Capital growth for 2019 moderated across the entire sample, standing at just 1.1 per cent, down from 4.3 per cent in 2018.

The slower capital value growth was attributable in part, BNPRE says, to the negative impact of the Government’s 1.5 per cent increase in commercial stamp duty in Budget 2020.

Equivalent yields for the Dublin office market stood at 5.3 per cent in December 2019, representing a contraction of 12.7 bps (basis points) relative to December 2018. Equivalent yields in suburban locations were higher, indicating the potential for further strong growth in these locations.