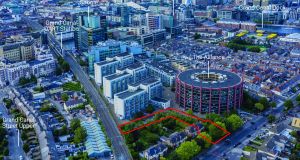 While the exponential growth of Google’s European headquarters in Dublin’s Grand Canal Dock over recent years has undoubtedly encouraged other major companies to locate in the area, it is increasingly also serving to drive the interest of developers in nearby sites primed for residential accommodation.

That certainly appears to be the case with the sale of a 0.11 hectare (0.25 acre) plot and adjoining four-bedroom semi-detached house on South Lotts Road.

Having been brought to the market by joint agents Hooke & MacDonald and McNally Handy for an overall guide price of €1.8 million, the Dublin 4 portfolio has now been sold to an as-yet-unidentified Irish developer for €4 million.

The price paid is more than double the figure which had been expected when the site was offered for sale last September. The selling agents had been guiding €1,250,000 for the site and €550,000 for the house or €1.8 million for the entire. The disposal of the property took place on the instructions of Ken Fennell, statutory receiver in Deloitte on behalf of Nama and liquidators Butler & Company.

Located adjacent to Barrow Street and the Gasworks development on the northern side of South Lotts Road, the subject site is zoned “Z1 Residential” and came for sale with a positive planning history. An expired planning permission for 21 apartments could possibly be increased under the new planning guidelines subject to the necessary consents being obtained.

The plot’s potential was evidenced by the marketing for sale last September by G2 Construction of a nearby development of nine townhouses known as The Ropery. Prices at the scheme ranged from €730,000 for the three-bedroom houses to €850,000 for the four-bedroom houses.

The subject property is situated within close proximity to the offices of a number of major employers including Google, Airbnb, Facebook, Mason Hayes & Curran, William Fry and State Street.

In terms of public transport, the site is located within a short walk of the Dart station at Grand Canal Dock. Local amenities include the Aviva Stadium and the Bord Gáis Energy Theatre, as well an abundance of restaurants, pubs, cafes and shops at Ballsbridge and in Dublin city centre. Both Herbert Park and Merrion Square are within walking distance.

1 Belgium helps Ireland to a Brexit boon
2 ‘My rent here is so low it’s a joke’
3 Can Grafton Street stop the flood of closures?
4 This charming man: how Paschal Donohoe won the Eurogroup presidency
5 New Powerscourt Springs hotel to open in defiance of virus gloom
6 ‘Sad day’ for House of Ireland as tourism retailer goes out of business
7 Income tax receipts prove remarkably resilient to coronavirus
8 Paschal Donohoe’s election as Eurogroup president ‘a great win for Ireland’, says Taoiseach
9 Goodbody’s planned €155m sale to Bank of China falls through
10 Goodbody loses a second suitor as Bank of China deal falls through
Real news has value SUBSCRIBE