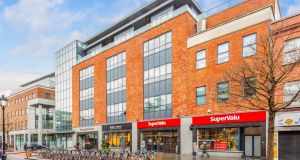 Just over 18 months on from acquiring the Dublin headquarters of Independent News & Media (INM), Joe O’Reilly’s Chartered Land is looking to sell the property for a significant profit.

Having paid €24.3 million to purchase Independent House and 10 of the 11 units in the adjoining Brett Court apartment block in late 2018, the developer has instructed agent Knight Frank to offer INM’s offices to the market at a guide price of €29 million.

Located at the corner of Talbot Street and James Joyce Street, the building is fully-let to INM and to Supervalu, which trades from the ground floor. Both are established tenants and have been in situ since 2004. With a combined rent roll of €1,782,200 per annum, the sale of the property offers investors the opportunity to secure a net initial yield of 5.6 per cent.

The office space extends to 4,173.03sq m (44,918sq ft) and is arranged in an open-plan layout, all of which has been finished to a high specification. The fourth and fifth floors have extensive terrace amenity areas, while each floor includes a kitchenette facility , male and female WCs and shower facilities. The office space is served by three Schindler 10-person lifts.

The retail space at ground floor level extends to 896.43sq m (9,649sq ft). The unit has been fitted out by the tenant and is finished to the high standard that SuperValu and its café offering, Frank & Honest, produce nationwide. There is ancillary storage in the basement of approximately 54.23sq m (584sq ft). The property has 26 secure basement car parking spaces that are accessible off Foley Street.

INM occupies the building under a 25-year full repairing and insuring lease from September 2004. INM is one of the largest newspaper and online publishers in Ireland, and is the largest wholesale distributor of newspapers and magazines on the island.

The company’s latest annual report and accounts stated a pre-tax profit of €24.1 million, total revenue of €191 million and cash equivalents of €81.7 million. INM is a subsidiary of Mediahuis, having been acquired by the Belgian-headquartered publisher for € 145.6 million in 2019. Mediahuis has a D&B financial strength rating of 5A (strongest rating) and a D&B risk indicator of 1 (minimum risk rating). The group had a consolidated turnover of €857.9 million in 2019.

SuperValu occupies the ground floor of Independent House on a 25-year full repairing and insuring lease from December 2004. SuperValu is part of the Musgrave Group, Ireland’s largest grocery and food distributor. With 223 stores throughout Ireland, SuperValu has thrived in Ireland for over 30 years, and has become a well-established landmark across Irish communities.

While Talbot Street already benefits from a high volume of pedestrian and vehicular traffic thanks to its location and use as the main thoroughfare between Connolly Station and O’Connell Street, the area is set for significant regeneration in its own right.

Independent House itself is situated just 240m from the Connolly Quarter mixed-use scheme which developer Sean Mulryan’s Ballymore and its Singapore-headquartered partners Oxley Holdings are aiming to deliver on a 2.88 hectare (7.12 acre) site adjacent to Connolly Station in Dublin 1.

Only recently Ballymore secured the green light from Bord Pleanála to proceed with the development of a 23-storey apartment block as part of its plan to build 741 apartments residential units on the site.