Owners may allow premises to be used to help resolve crisis 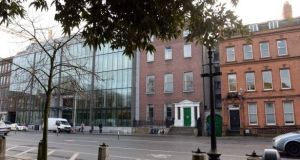 The owners of a former university hostel on St Stephen’s Green, who overcame a wave of opposition to receive planning permission to convert it into a a luxury 81-bedroom hotel, are believed to be considering allowing the premises to be used to help solve the housing crisis.

An Bord Pleanála gave the go-ahead for the planned €40 million eight-storey hotel at No 77 St Stephen’s Green last year, despite objections from the Department of Foreign Affairs, the Office of Public Works and the Irish Georgian Society. The department, in particular, had warned of security and privacy risks associated with having the hotel next door to its headquarters, Iveagh House.

It is understood the owners, Brown Table Solutions, have recently held talks with a number of approved housing bodies, including Focus Ireland and Clúid, about the building being used to accommodate people if it is not sold in the coming months.

The news comes just days after up thousands of people took part in a protest in Dublin demanding action to end the housing crisis. Recent figures show nearly 10,000 people are currently in emergency accommodation.

No 77 was built for the Earl of Glandore in 1765. It was bought by the Loreto Sisters in 1911 to use as a hostel for young women from outside Dublin attending the National University at nearby Earlsfort Terrace, which had begun enlisting women students just three years previously.

Loreto Hall remained in use for “country girls” going to colleges in the city until the 1990s.

Under the approved plans, the original Georgian house will have eight suites along with a range of graceful reception rooms. A former chapel will be converted into a distinctive restaurant and bar, while the planned new nine-storey block to the rear will accommodate 73 guest bedrooms, each with average floor areas of 22.5sq m (242sq ft).

An Bord Pleanála responded to concerns raised to Brown Table’s initial proposal by ordering the omission of a planned penthouse suite level, and of one floor from the planned hotel.

In its ruling, the board said the development would not adversely affect the character or architectural significance of the historic buildings around the site.