Redeveloped block has 45,000sq ft for offices, restaurant and gym, plus more parking 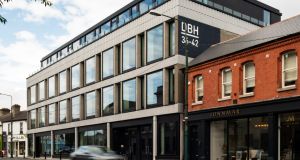 Donnybrook House, for many years a tired and outdated centre for AIB’s computer services, has been largely redeveloped to accommodate high-quality offices and a mixture of restaurant and gym facilities in the centre of Donnybrook village in Dublin 4.

British property regeneration specialist U+I and US investor Colony Capital are spending €15 million-€18 million on converting the extended six-storey block, which is now available for letting through agents CBRE and Colliers. The investment is expected to produce an annual income of €2.5 million-€3 million.

The high-profile block directly opposite Donnybrook Garda station was originally sold at auction to investor Starwood in the early part of the property crash for €3.775 million. U+I and Colony subsequently acquired it for close to €10 million and appointed Henry J Lyons architects to oversee redevelopment of the block, including the addition of a new top floor and a second floor level in the basement car park.

The provision of the extra space means that the newly named DBH block has 3,716sq m (45,000sq ft) of offices to let over four floors and a spacious outdoor balcony with clear views over nearby Herbert Park.

The letting agents plan to quote rents of €452-€538 per sq m (€42 to €50 per sq ft) for the offices, which should be of interest to high-tech companies given their convenient location close to a range of international technology firms.

Negotiations are already at an advanced stage on letting of the gymnasium over two basement levels with a floor area of 1,672sq m (18,000sq ft). The basement will also have 27 car parking spaces.

The marketing campaign to let DBH is being handled by Eoin Condren, U+I’s director of Joint Ventures, who says his task has been made easy by the fact that “everybody knows the building because of its prominent location in the central business district”.

With redevelopment work on DBH almost complete, U+I has commenced the upgrading of Ballymoss House, a 73,000sq ft (6,781sq m) office block in Sandyford, Co Dublin. The joint venture is is being undertaken with Collen Construction, one of the best-known office developers in the city.