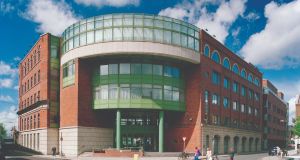 The process of selecting an agent to handle the sale of the DIT’s Aungier Street campus is underway, with expectations that it will be brought to the market shortly at a guide price of around €100 million.

The move by the DIT’s successor – Technological University Dublin – to dispose of the property forms part of its wider plan to relocate its entire student body and faculty to its new centralised campus at Grangegorman in Dublin 7.

The sale of the 2.54 acre Aungier Street campus is expected to attract significant interest from a range of developers and investors given the strength of its location in Dublin city centre, and its potential to accommodate a range of uses including offices, residential, hotel and retail.

Only recently, the DIT secured €140 million from the sale of its nearby Kevin Street campus to developer Shane Whelan’s Westridge Real Estate. The price paid represented a premium of 75 per cent on the €80 million agent Knight Frank had been guiding when it brought the property to the market last February.

Westridge is now expected to seek planning permission for a major mixed-use scheme on the 3.57 acre site, comprising mainly Grade A office space alongside a large element of private rented sector apartments, and food and beverage offerings.

DIT’s Aungier Street campus is expected to present its prospective purchaser with a similar opportunity to the Kevin Street site. Both properties are zoned “Objective Z5 - City Centre” under the Dublin City Development Plan 2016-22. The primary purpose of this designation is “to sustain life within the centre of the city through intensive mixed-use development.

A feasibility study prepared by architects O’Mahony Pike in preparation for the Aungier Street sale presents four potential options for the site. The first option provides for retention of the site for educational use or the development of an office scheme of 38,655sq m .

The second option provides for the delivery of a hotel of 13,860sq m and 28,140sq m of offices. Option three proposes the development of a 10,580sq m hotel, an office scheme comprising 23,330sq m and 210 build-to-rent apartments. The fourth and final option suggests the site could accommodate 38,915sq m of offices and 180 rental apartments.

As is the case with DIT’s former Kevin Street campus, the Aungier Street property is situated in a much sought-after location in Dublin city centre.

The subject site is situated just 350 metres west of St Stephen’s Green and less than 500 metres northeast of Grafton Street.

In terms of its accessibility by public transport, the property is serviced by the Luas Green Line with stops at St Stephen’s Green and Harcourt Street both within 700 metres of the subject site.