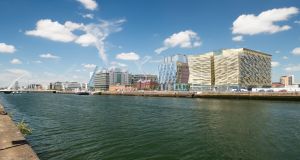 An artist’s impression of the nine-storey Salesforce building approved by Dublin City Council.

Developer Johnny Ronan will make a third bid to increase the height of Salesforce’s new European headquarters at Spencer Dock with the submission of a new planning application to Dublin City Council next week.

Having had his efforts to secure permission for a further two floors at the scheme knocked back by the city’s planners twice this year already, Mr Ronan’s company, Ronan Group Real Estate (RGRE) now intends to seek approval for an additional four storeys at Salesforce Tower.

While the developer’s latest proposal flies in the face of the council’s rejection of his previous efforts to raise the building’s height from nine to 11 floors, RGRE will argue it is consistent with the local authority’s own recently-revised recommendations for building heights in the North Lotts and Grand Canal Dock Strategic Development Zone (SDZ).

While An Bord Pleanála has yet to reach a determination on the matter, RGRE is pressing ahead with its latest planning application in the hope that the appeals board will give its approval to the council’s revised height recommendations shortly.

There is no guarantee, however, that the developer will secure approval from the city council for a 13-storey building at Spencer Place even in the event that An Bord Pleanála agrees with the local authority’s revised height recommendations for the area.

In its most recent rejection of RGRE’s application for an 11-storey structure the city’s planners said the “proposed addition of the two floors at Spencer Place would “be unduly dominant and visually incongruous when viewed in the context of the existing quayscape on North Wall Quay, a conservation area, and the surrounding built environment”.

The council added that the proposal would “adversely impact on the setting of the former London and Northwestern Hotel, a protected structure, and other buildings of historic interest in the vicinity” of the Spencer Place campus, and “would present an unduly monolithic appearance when viewed from the surrounding streets”.

The council’s determination that the proposed additional storeys at Spencer Place “would not be consistent with the provisions of the [North Lotts and Grand Canal Dock SDZ] planning scheme”, may now be revisited however, in view of its latest recommendation to increase the heights permissible in the area.

In seeking permission for two extra floors at Salesforce Tower originally, Mr Ronan has argued the space would accommodate an additional 1,000 workers and increase the fees paid to CIÉ, which owns the site, by €20 million.

The permitted height for the Dublin tower is 39m. Mr Ronan’s company had first sought to secure permission for two extra storeys at the project, following the implementation of new rules on building heights introduced by the Minister for Housing Eoghan Murphy last year.