Car ownership as we know it is coming to an end, conference told 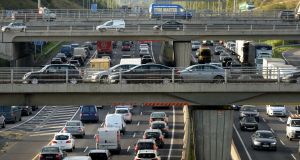 It is approaching “five minutes to midnight” for the private car as young people are increasingly choosing other modes of transport, a conference on sustainable living has heard.

Dr Sarah Rock, a transport and urban design specialist with Technological University Dublin (TUD), said there were signs in the developed world that “peak car” had passed and private car ownership is on the decline.

She predicted mass car ownership “as we know it” is coming to an end to be replaced by car sharing schemes, better public transport, cycling and e-scooters.

Dr Rock told the Better Homes conference organised by the Irish Green Building Council that there has been a marked fall internationally in the numbers taking car journeys or getting driving licences.

Dr Rock said economic factors such as the reduction in stable jobs and disposable income, a reduction in home ownership and people starting families later were factors in the decline in car use among young people.

However, she stressed there was a change of values among young people who do not prize car ownership the way previous generations did.

She said even car manufacturers are pioneering car sharing schemes, citing BMW’s Reachnow service in Seattle and Brooklyn as an example, though that service has now been discontinued.

One car share vehicle can replace up to 15 private cars and could greatly reduce the number parked on the street. “We have the potential to completely transform our urban areas,” she told the conference.

Cities like Helsinki and Birmingham have launched all-in apps which allows commuters to use public transport, public bikes, car sharing facilities, taxi and car rental for a set fee every month.

In Helsinki, which pioneered the Whim app, you can pay a €49 subscription for unlimited monthly public transport or €499 a month which includes unlimited taxi and car sharing access.

“We have the potential to address the key reason why private car ownership is so successful and that’s the whole convenience factor,” she said.

“We need to understand the impacts. It has the potential to be a gamechanger especially for the younger cohorts. It helps address the whole costs of cars and the inefficiencies of car ownership.”

The new standards will also consider the emissions associated with the construction of a house. These account for more than half of the whole lifetime carbon emissions from new homes.

Speaking at the conference the Minister for Housing Eoghan Murphy said Ireland can be a world leader in producing “near zero rating homes” and is one of only three countries in the world recognised by the United Nations with a centre of excellence for sustainable homes.

It is located in Enniscorthy, Co Wexford and will provide education in high performance buildings to international students.