Deirdre Foley was paid at least €7.6m from Clerys proceeds

Natrium sold department store to Press Up Entertainment for €63 million 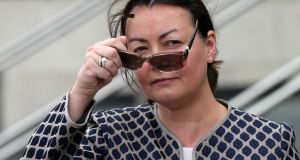 Property developer Deirdre Foley was paid at least €7.6 million after last year’s sale of Clerys, which has lain shuttered and undeveloped in Dublin city centre since her Natrium consortium acquired it in 2015.

Natrium sold the department store last October for €63 million to Press Up Entertainment, the hospitality group run by Paddy McKillen jnr. Natrium bought Clerys for €29 million in 2015, after which the store on O’Connell Street was shut and its workers sacked.

It subsequently received planning permission to redevelop it, before flipping it to Press Up in October for a large profit. Accounts filed recently for a series of Clerys-linked companies show the financial returns enjoyed by Ms Foley from the deal.

Natrium paid its owners a €16.5 million dividend. About 80 per cent of that went to a company linked to Cheyne Capital, a UK group that backed the 2015 purchase. Ms Foley’s company, however, received €3.3 million of the dividend for her 20 per cent stake.

Natrium’s accounts show a €1.9 million loan by Ms Foley’s company – her original capital injection into the 2015 deal – was also repaid after last year’s sale, along with interest of about €400,000.

Her FAM Assets company was also paid a €600,000 “debt fee” from the proceeds. A further fee of €395,000 was paid to another of Ms Foley’s companies, FAM Acquisitions for services in 2018 provided to Natrium, while about €50,000 owed from the previous year was also paid.

About €317,000 owed to another Ms Foley company, D2 Private, for services provided in 2017 was also paid. Her FAM Acquisitions was also paid €695,000 in management fees last year by OCS Properties, the company that held the title to the Clerys building.

A further €1.8 million in fees that were owed by OCS Properties since 2017 also appeared to have been paid, although it is unclear how much, if any, of this went to Ms Foley’s companies.

Ms Foley did not respond to an emailed request for comment on the figures and there was no answer from the offices of D2 Private.

When the 130 directly-employed Clerys workers lost their jobs, the State stepped in to contribute to statutory redundancy payments, although Natrium later paid €1 million to workers via Siptu, as part of a settlement to get the union to drop a planning objection to the proposed Clerys redevelopment.