Jysk aims to increase number of stores in Ireland to 40 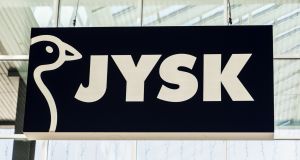 Jysk intends to open 40 outlets in the Republic by 2021, giving it a forecasted turnover here of €70 million a year.

Danish-owned furniture seller Jysk is inviting landlords to an open day next month as it aims to increase the number of stores it plans to open here from 15 to 40.

The strong performance of Jysk’s first Irish store, in Naas, Co Kildare, sparked the Scandinavian-founded chain to increase the number of outlets it intends to open in the Republic by 2021, giving it a forecasted turnover here of €70 million a year.

“We have noted that in other parts of Europe we can issue and sign a lease contract within two to four weeks, whereas in Ireland this is taking up to 16 weeks in some cases,” he said.

Jysk is inviting potential landlords to an open day at the Red Cow Moran Hotel on Dublin’s Naas Road on September 16th in a bid to find suitable properties for the chain’s stores.

The Naas shop is the second best performer in Jysk’s Nordic division. The group is opening further stores in Cork, Limerick, Waterford and Sligo.

Roni Tuominen, head of retail at Jysk Ireland, said: “The appetite for Jysk’s offering is there amongst Irish consumers, and we have seen this in our revision of forecasted figures for 2019, which have been increased by almost 50 per cent.”

Jysk founder Lars Larsen died last week, two months after stepping down as chairman following a cancer diagnosis. He was 71.

Mr Larsen, one of his country’s best-known and richest men, opened the chain’s first outlet using $20,000 he had saved. Today it has 2,700 stores in 52 countries and sales of more than €3.6 billion a year.