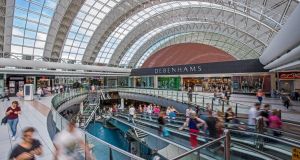 The Blanchardstown Centre has over 16.5 million visitors annually

The Blanchardstown Centre is set to grow its already-significant footprint with the addition of 55,000sq ft of new retail space.

Upon completion, the development will comprise eight units, two of which will house flagship stores for supermarket giant Aldi and fashion retailer JD Sports. These units will extend to 20,000sq ft and 15,000sq ft respectively.

Developed originally by Stephen Vernon’s Green Property in 1996, the Blanchardstown Centre is acknowledged as one of Ireland’s foremost and most successful retail and leisure operations with over 16.5 million visitors annually. The scheme currently includes over 180 stores and is anchored by Dunnes Stores, Marks & Spencer, Penneys and Debenhams.

The latest investment in the centre by current owners, Blackstone, is expected to cost in the region of €32 million and will see the creation of 125 permanent positions. An additional 150 to 200 jobs are set to be created during the construction phase which is now underway under the direction of the centre’s managers, Multi Ireland.

Commenting on the development, managing director of Multi Ireland, Pat Nash, said: “The commencement of construction on this new phase at Blanchardstown Centre represents a key milestone in the creation of an improved shopping experience for our customers. The new investment and upgrade offers exciting opportunities for retailers to thrive in one of Ireland’s leading retail locations.”