Benson Building was put up for sale in August last year 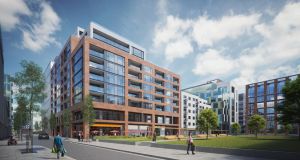 German fund Patrizia AG has added yet again to its burgeoning Dublin build-to-rent portfolio having agreed to pay €52.5 million for a block of apartments with 72 homes.

For its fourth investment in Dublin’s fast-growing private rented sector (PRS), Patrizia acquired the Benson Building in Dublin’s Docklands which is due to be ready for tenants by early 2020.

Additionally, the building will have two ground-floor retail units as well as accommodation for a gym. Concierge facilities will also be provided as well as underground parking for 72 cars.

The company’s first Irish purchase saw it secure ownership in 2015 of 63 apartments at the Park Lodge scheme on the North Circular Road for €15 million, or an average of €238,095 per unit.

In 2017, Patrizia grew its Dublin portfolio substantially when it paid €132 million for 319 apartments in the Leona and Charlotte buildings at Cosgrave Property Group’s Honeypark development in Dún Laoghaire.

Its latest €52.5 million deal will see it pay an average of €729,166 per unit, more than three times the average price it paid for its first purchase at the Park Lodge scheme.

However, that’s not necessarily out of kilter with prices in the Docklands area. In 2018, Cairn Homes agreed to sell its development at Six Hanover Quay – now known as Opus – to Carysfort Capital for €101 million. That represented an average sale price of €841,666 for each of the 120 apartments.

Two-beds at Six Hanover Quay start from €3,700, while the expected rental value of the Benson Building suggests an average rental price of more than €3,300 per month.

According to the sales brochure for the Benson Building, once complete it will account for about 11 per cent of new residential supply for the prime south Docklands. And while the pipeline of net new office development in the area has the potential to accommodate more than 11,000 additional workers, just 665 new units were in the pre-planning, planning or construction phase.

Patrizia’s addition to its PRS portfolio comes amid a flurry of activity in the sector. According to Hooke & MacDonald, in the six months to the end of June, some €703 million in sales were conducted across 12 schemes in the sector. That represents 41 per cent of the €1.72 billion in property investment sales completed in Dublin in the first half of 2019.

In terms of upcoming sales activity, the Hooke & MacDonald report said there were 18 residential investment transactions with a combined value of €516 million currently at sale agreed stage in Dublin. Six of these deals involve new-build developments, comprising 696 units.