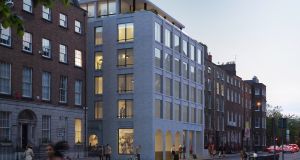 Property developer Paddy McKillen jnr has, at the second attempt, won approval from An Bord Pleanála (ABP) for a new hotel development on the site of the old Howl at the Moon venue on Lower Mount Street in Dublin.

Dale Vision, a company that is associated with Mr McKillen jnr’s Oakmount development group, will build a 52-bedroom hotel on the site of the former landmark nightclub, which it bought for about €3.2 million in 2016.

It will be the third hotel in the city developed by Mr McKillen and his business partner, Matt Ryan, after the Devlin in Ranelagh and the Dean hotel on Harcourt Street in the city centre.

The new hotel will sit within the duo’s sprawling Press Up Entertainment hospitality group, which operates on about 40 sites and also includes bars such as the Workman’s Club and the Lucky Duck, and restaurants such as Elephant & Castle and Union Café.

Oakmount confirmed on Wednesday that construction work on the boutique hotel is scheduled to commence “immediately”.

Dale Vision first sought permission to flatten the nightclub building and build a hotel in 2017, although it attracted numerous objections including from An Taisce and Matthias Höpfner, who was at the time the German ambassador to Ireland. His objection to the project’s scale and height was later withdrawn.

Dale Vision launched a renewed bid for planning permission last year, maintaining the building’s number of storeys but dropping a bedroom. The top floor was to be set back slightly, while part of the Victorian shopfront would be retained. The proposal also includes a rooftop restaurant.

The council again approved the scheme last September. A Rathmines resident took an objection to ABP, which this week gave the project the green light.