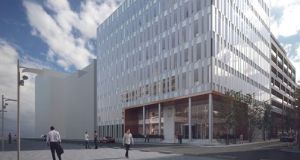 US cybersecurity firm Tenable has put a plan to relocate its existing international headquarters in Dublin to a new and bigger office in the city’s docklands “on hold” due to the Covid-19 crisis.

Prior to the outbreak of the coronavirus, the company had been at the advanced stage of discussions in relation to leasing around 40,000sq ft of space at 76 Sir John Rogerson’s Quay, a new grade A office scheme being delivered by Targeted Investment Opportunities (TIO), an umbrella fund involving Nama, Los Angeles-based Oaktree Capital and Bennett Construction.

The proposed move would have given Tenable the capacity to grow its Dublin-based workforce by up to 300 workers. The company opened its first international offices here in 2017 with an initial plan to create 100 jobs within two years.

Headquartered in Maryland, Tenable, which was founded in 2002, has more than a million users and more than 30,000 customers globally, including the US department of defence. The company, whose main products include SecurityCenter and Nessus, helps companies prioritise cybersecurity threats and reduce exposure and loss.

While it remains to be seen if Tenable will re-engage in talks for office space at 76 Sir John Rogerson’s Quay, the scheme’s core location in Dublin’s docklands area is expected to help it to achieve full occupancy relatively quickly once the threat posed by the coronavirus passes. Distributed across two blocks comprising an overall area of 75,498sq ft, the property is being offered to the letting market on behalf of its developers by agent Savills Ireland. Savills declined to comment on Tenable’s decision to step back from negotiations for space at the scheme when contacted by the Irish Times.

The offices at 76 Sir John Rogerson’s Quay are just one part of a wider office and residential development delivered by TIO at the south docklands site.