Cosgraves secure half-acre site in Dublin 8 for about €6.5m 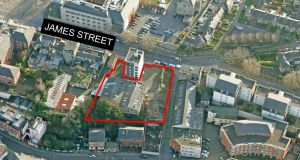 A large number of parties expressed interest in acquiring the James Street due to its location and the existing planning permission for a 149-unit aparthotel.

The Dublin Loft Company has emerged as the purchaser of a prime 0.5 acre development site on James Street, Dublin 8, where the company is likely to develop an aparthotel. The site, located at 180, 182, 183 and 184 James Street, was marketed for sale in January through the CBRE agency seeking €5.75 million.

According to documents filed with the Companies Registration Office for James’s Street Hotel, a newly-incorporated subsidiary, the sale of the site completed last month for a sum believed to be more than €6.5 million.

This is the Dublin Loft Company’s second venture into the Dublin 8 market, having previously acquired a site at 98/99 Francis Street where they secured planning permission for an apartment scheme. They sold the site to a son of Ryanair heir Declan Ryan, who recently completed the building.

Outside of Dublin 8, the company has developed new homes schemes in Smithfield, Grand Canal Dock and Northwood. The company is also developing a new hotel at Hendrick Street in Smithfield.

While the Cosgraves ultimately emerged as the top bidder for the James Street site, it is understood that a large number of parties expressed strong interest in acquiring the property due to its location and the attractive existing planning permission for a 149-unit aparthotel that was secured by the vendor, Mullins Investments, a company connected to Singapore-based Irish businessman Peter Mullins.

Selling agent Peter Garrigan of CBRE had no comment regarding the identity of the parties involved in the James Street transaction, but he noted that an interesting feature of the sales process was the high level of interest by co-living developers and operators, with about five international new entrants to the market expressing interest. “We received traction from co-living developers looking to establish a presence here in Ireland. They see huge opportunities here based on our transient workforce and our dedicated co-living planning code.

Garrigan added that “based on existing opportunities we will see a further push from European and US co-living developers and operators looking to enter the market in the next 12 months.” CBRE is in the process of selling other sites across the city to co-living developers and is aware of a number of other similar deals currently in progress with other agencies.

Following the introduction of co-living planning guidelines in March of last year, little activity took place in that space in 2018 but in recent weeks there has been a surge in activity, predominantly driven by Bartra Capital Property. Under its Niche Living brand, Bartra hopes to build and operate several co-living schemes at Eblana Avenue in Dún Laoghaire, First Avenue in Cookstown, Ardee Road in Rathmines and the former Brady’s Inn site on Blanchardstown’s Old Navan Road. Two of those developments, Eblana Avenue and First Avenue, are working their way through the fast-track planning process with ambitions for a combined 430 bed spaces.