O’Flynn gets permission for €80m housing scheme in Celbridge

Kildare site will deliver 251 ‘starter’ houses and apartments, with prices for a three-bedroom house starting at €360,000 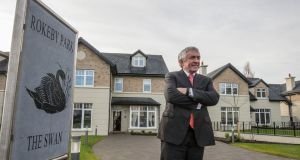 Michael O’Flynn at his development in Lucan, one of four that he has under way in the greater Dublin area. Photograph: Brenda Fitzsimons

Cork property developer Michael O’Flynn has received planning permission from An Bord Pleanála for 251 homes at a €80 million scheme in Celbridge, Co Kildare.

The permission allows for a scheme comprising 167 new houses, 84 apartments and a creche on a site at Shackleton Road and Oldtown Road in Celbridge following an application in December 2018 using SDZ fast-track planning procedures.

It will also include the erection of two new ESB pylons, bicycle and car parking, the upgrading of a nearby road junction, landscaping, public lighting and cycle lanes.

The houses are a mix of two-, three- and four-bedroom detached, semi-detached and mid-terraced houses, while the apartments will comprise one-, two-, and three-bedroom units in two and three-storey blocks.

Mr O’Flynn said the units would be pitched as “starter” homes, with prices for a three-bedroom unit from €360,000 to €380,000. The scheme will also include social housing.

“We will begin work there probably after the builders’ holidays in August, with showhouses to open in the spring of next year,” Mr O’Flynn told The Irish Times. “We hope to sell 50 to 70 units a year...the market wouldn’t take anymore than that.”

Mr O’Flynn said his company – O’Flynn Construction – would start by building houses within the scheme, with the apartments left to a later date.

“Apartments viability is a big issue. Especially in the greater Dublin suburban region. But we have to achieve minimum densities on all lands at the moment.”

The scheme is being developed on a 50-plus acre site that also includes land that has yet to be zone for residential use. If fully developed in the coming years, the site could ultimately take about 600 units, according to Mr O’Flynn.

When schemes at Kinsealy, Cabinteely and Lucan are added, Mr O’Flynn is working on about 630 units in the greater Dublin region. Some 130 of these are already built, with 500 at various stages of development.

Mr O’Flynn also has 800 housing units under way in Cork, and is in the final stages of completing the 966-bedroom Point Campus student accommodation unit near the 3 Arena in Dublin’s docklands, in conjunction with global asset manager Blackrock.

He expects to complete between 250 and 300 new housing units this year across his schemes.

While pleased to secure permission for his Kildare development and busy across a number of schemes, Mr O’Flynn said the housing market remained dysfunctional. In particular, he was critical of the Central Bank for imposing a limit of 3.5 times income for those borrowing for a mortgage, citing how the UK allowed a 4.5 times limit.

“We now have a situation where people are paying more in rent than they would for a mortgage, while at the same time being required to save for a mortgage. It’s an extraordinary situation that I’ve never seen before in my time building. There needs to be a Government response.

“There’s demand for 40,000 houses and the industry is struggling to build half that. We need a coherent plan on housing otherwise jobs are going to be affected.”

In terms of student accommodation, Mr O’Flynn said the Dublin market “needs to take a reality check” given the level of supply now in the market. “Some of the prices paid for student sites make no sense.”