Seafront plot has potential to accommodate scheme of 102 apartments 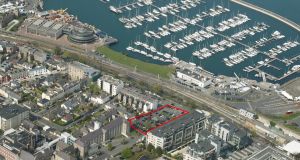 An aerial view of the site to the rear of St Michael’s Hospital on Crofton Road in Dún Laoghaire, Co Dublin

Solicitor and developer Noel Smyth has abandoned a long-standing plan to develop apartments on a seafront car park that his company owns to the rear of St Michael’s Hospital in Dún Laoghaire, Co Dublin.

Having first sought permission in 2007 to build a scheme of 80 homes and two shops on the site, the high-profile businessman has now instructed agent Knight Frank to offer the property to the market. The site, which extends to 0.79 acres (0.32 acres), is being marketed as an “exceptional residential development opportunity” at a guide price of €6.5 million.

Located on Crofton Road, the site currently comprises of an operating car park and a two-storey dwelling. It has more than 40m of road frontage, and is bounded by the Harbour View residential scheme to the east, residential dwellings to the west and St Michael’s Hospital to the south. The car park is currently operating under a short-term licence agreement.

While Mr Smyth had considered submitting an application to Dún Laoghaire Rathdown County Council earlier this year for 100 Build-to-Rent (BTR) apartments, it is understood he decided against this, choosing instead to devote his time to a number of other projects.

A feasibility study prepared by Reddy Architecture & Urbanism identifies options ranging from 74 to 102 units based on both BTR and Build-to-Sell (BTS) models, along with car parking, open space and residential amenity areas (subject to planning permission).

The site will be of interest to developers and investors involved in the delivery of accommodation for the private rented sector. It should also prove attractive to those potential purchasers seeking to capitalise on the large empty nester market in Dún Laoghaire and the surrounding areas of Monkstown, Glasthule, Glenageary, Dalkey and Killiney.

Quite apart from its potential as a residential scheme, the site’s major town centre zoning under the council’s Development Plan 2016-22, provides for the development in principle of hotel, office and retail accommodation.

In terms of its accessibility, the site is located immediately opposite Dún Laoghaire Dart station, providing ready and regular access to Dublin city centre and the towns of Bray and Greystones. The area is also well served by a number of Dublin Bus services.