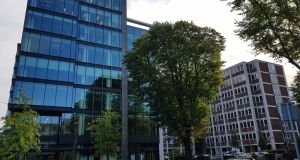 The Comer Group looks to have set a new benchmark for Dublin’s office rental market with the letting of a penthouse floor at Number One Ballsbridge to Coca-Cola for €101 per sq ft.

With prime office rents in the city’s core central business district and docklands area continuing to hover in the range of €60- €65 per sq ft, the soft drinks giant has committed to paying a significant premium to secure the seventh floor penthouse office suite in Building 3 at the Ballsbridge scheme.

But while the rent agreed by Coca-Cola far outweighs the sums being paid for prime office space both in the city centre and Dublin 4, there have been instances where occupiers have paid higher-than-average rents to secure penthouse office accommodation. In 2018, Canadian bank subsidiary, TD Securities, agreed to pay what was then regarded as a record €70 per sq ft to lease the 950sq m (10,225sq ft) penthouse floor at Green Reit’s One Molesworth Street development.

Coca-Cola has easily eclipsed that record with its agreement to pay over €100 per sq ft for its penthouse offices in Ballsbridge.

Situated on Pembroke Road, on the site between the Ballsbridge Hotel and Hume House, Building 3 at Number One Ballsbridge comprises a total of 19,640sq ft of Grade A office space distributed over eight storeys.

Coca-Cola’s seventh floor office accommodation, which extends to 1,985sq ft, occupies an enviable position within the building and the overall development, overlooking the American Embassy.

Located on the lands formerly occupied by the UCD Veterinary College, Number One Ballsbridge offers a total of 12,579sq m (135,400sq ft) of Grade A office space across three blocks. The scheme also incorporates 89 high-end apartments and luxury retail.