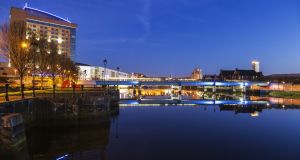 The Belfast office market delivered a total return of 12.4 per cent – comfortably above the UK average. Photograph: iStock

Investors in the North’s commercial property market saw their “total returns” slump from 8 per cent to 1.7 per cent last year because of a slowdown in both income return and capital growth, new research shows.

But Northern Ireland, according to the NI Commercial Property Investment Review 2018, produced in partnership by Ulster University, did do better than Wales where investors got a total return on their money of just 0.2 per cent.

The comprehensive review, which the university produced with global financial firm MSCI and the Royal Institution of Chartered Surveyors, shows that Northern Ireland’s commercial property investment market experienced a “marked slowdown” last year primarily because of two key factors: Brexit and the underperformance of the local retail property sector.

But the review, published on Wednesday, also notes that the North’s office market was an outperformer, generating a total return of 12.3 per cent.

The Belfast office market delivered a total return of 12.4 per cent – comfortably above the UK average of just over 6 per cent and better than major cities such as London, Glasgow and Manchester.

“The modern breed of IT and professional services occupiers are highlighting Belfast as a progressive, go-to and contemporary location offering investment opportunities comparable with and exceeding other European locations,” he added.