Athlone’s Golden Island shopping centre on the market at €41m 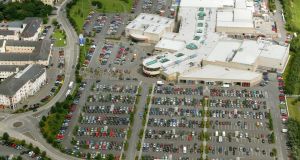 Aerial view of the Golden Island shopping centre in Athlone. 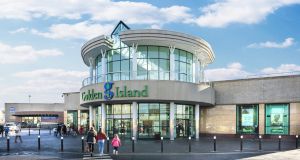 The sale of Athlone’s Golden Island shopping centre is expected to test the appetite of investors for Irish retail at a time when the sector is being challenged internationally by the growth of online shopping.

The 23-year-old centre comes to the market just over three years after its current owners, Credit Suisse, acquired it from British supermarket giant Tesco, for €43.5 million.

This time round, Jonathan Hillyer and Peter Love of Cushman & Wakefield are seeking offers in excess of €41 million for the landmark scheme, which was developed originally in 1996 by the late Owen O’Callaghan, Michael Tiernan and Tom Diskin.

Golden Island is anchored by Penneys and Tesco and an IMC Cinema. The wider tenant mix of more than 40 retails units includes international names such as Boots, Argos and Burger King.

Excluding the cinema, the retail element of the scheme extends to an overall area of more than 14,800sq m (160,000sq ft). There is a substantial car park with 1,000 spaces, making this centre the focus for retail in Athlone.

The shopping centre has an average footfall of more than 68,000 people a week, or over 3.5 million people annually.

Since securing ownership of Golden Island in 2016, Credit Suisse has increased the annual rent roll from €3.1 million to €3.25 million through a combination of new lettings and increases secured on a recent phase of rent reviews. While the centre has effectively no vacancies at present, the selling agents say there is a strong list of potential occupiers seeking to locate there.

The proposed extension of the IMC Cinema (subject to planning) and the potential development of a new 2,500sq ft restaurant unit (which will be owned by the landlord) are expected to increase visitor footfall and “dwell time” further, underpinning Golden Island as a retail destination.

The current rent roll is in the region of €3.25 million while the average lease expiry comes in at under five years. That average is skewed significantly however by the number of original 25-year leases dating from the opening of the shopping centre in 1997.

One of these original tenants, Argos, is in the process of agreeing a lease renewal, a fact which Jonathan Hillyer said, highlights the retailer’s strong trading performance in the centre and belief in its future.

Golden Island has benefitted from a programme of continuous maintenance and “future proofing” of its facilities over the years. There has been significant investment in upgrading the centre’s BMS systems, CCTV technology, roof safety systems, and the replacement of obsolete fire safety systems.

Based on its guide price of €41 million, the prospective purchaser can expect to secure a net initial yield of about 7.31 per cent off the contracted rental income.