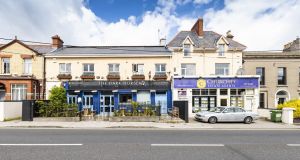 Agent QRE Real Estate Advisers is inviting offers in excess of €2.1 million for a mixed-use investment in Blackrock, Co Dublin.

The subject portfolio comprises numbers 27-29 and 31-33 Carysfort Avenue. The properties in question include the former Dark Horse licensed premises, the office of Churches’ Estate Agents, and a series of enterprise office units together with two apartments.

The passing rent from the buildings is approximately €149,000 per annum with vacant possession of the former licensed premises and several smaller office suites located on the upper floors.

The portfolio’s €2.1 million guide price equates to a net initial yield of 6.5 per cent after standard purchaser’s costs.

QRE’s Brian Garry says the property offers strong reversionary potential once the pub and vacant office suites are re-let. He says the portfolio has a total estimated rental value in the region of €220,000, which reflects a reversionary yield of approximately 9.65 per cent.

Given the site’s close proximity to both the Frascati and Blackrock Shopping Centres, QRE believes the property will be of interest not only to investors, but also to developers seeking to take advantage of the residential zoning of the buildings. The site comes with the potential for an infill mixed-use or residential-led development.

1 Tax and the Pandemic Unemployment Payment: Your questions answered
2 ‘I’m so lucky to be in the Caribbean – a million miles from Derry Girls’
3 Tobacco makers still trying to make a mint from Irish menthol market
4 ‘The recovery needs to be a full-scale economic renewal’
5 Household savings soar as consumers stop spending
6 Minister calls on EU to act against tobacco firms ‘undermining’ menthol ban in Ireland
7 Irish business of Carluccio’s restaurants to be wound up
8 Ireland stands to benefit in a big way from investing in public transport
9 Ryanair expects air fares to fall when flights take off again
10 Small businesses are cannon fodder in zealous anti-virus experiment
Real news has value SUBSCRIBE