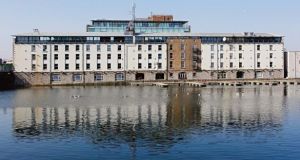 The Malt House in Dublin’s docklands.

Dublin City Council has granted planning to a company associated with billionaire businessman Denis O’Brien for additional floors on an office block in Dublin’s docklands.

Earlier this year, Jepview Ltd lodged plans to replace the fourth floor penthouse on the Malt House building and construct an additional four storeys on the new storey to result in a nine-storey office block.

However, Jepview omitted one of the planned new floors after the council observed that the plan may be excessive.

The council sought revised plans earlier this year after its conservation officer stated that “effectively this development will consist of five floors of a glazed vertical extension over a four-storey Victorian warehouse building”.

The conservation officer went on to say that the proposed extension should be reduced by at least two storeys to ensure that the scale of the glass extension remains appropriate.

However, the omission of only one floor was deemed sufficient by the council.

The grant for the vertical expansion of the Malt House building follows the city council planner concluding that the proposal “will upgrade a prominent location in the city centre, contribute to employment in the area and will allow for the construction of a striking and innovative contemporary/modern extension to an existing building in an inner city location”.

The planning official in the case also concluded that the proposal “exhibits a distinctive contemporary design which will make a positive contribution to the subject site and Dublin’s urban fabric”.

The council granted planning after concluding that the proposed development would not seriously injure existing buildings or the surrounding location.

The broader Malt House building was built in 1886 by Guinness as a barley store or malt house. The property was extensively redeveloped/subdivided in the mid-1990s and all that remains of the original fabric are the external masonry walls.

On behalf of Jepview, planning consultant Kevin Hughes told the council in a report that the contemporary design of the building “is deliberately different from the historic structure and will enhance the protected structure below it”.

Mr Hughes stated that “the redevelopment of the site will also ensure the continued use of the historic structure”.

Long-time associates of Mr O’Brien, John Ryall and Brian Fagan are directors of Jepview. The firm is controlled by an Isle of Man entity called Rispart Holdings Ltd.

The Real Estate Development & Investment Fund is also a part-owner of the site and has also given its consent for the application to be lodged. Consent has also been given by Partenay Unlimited – a firm linked to several of Mr O’Brien’s property investments.