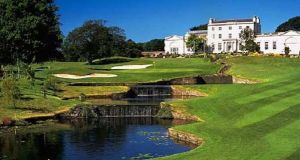 The Neville Hotel Group has moved to expand its portfolio with the purchase of the five-star Druid’s Glen hotel and golf resort in Co Wicklow.

It is understood the company recently exchanged contracts with the resort’s current owners on a deal which will see it secure ownership for around the €45 million guide price set by Tom Barrett of Savills when he brought the property to the market last year. News of the sale’s completion follows several months of negotiations between the parties.

Prior to its acquisition of Druid’s Glen, the family-owned and managed hotel group’s portfolio had comprised the Royal Marine Hotel in Dún Laoghaire, the Tower Hotel in Waterford City, and the Kilkenny River Court Hotel.

Located in north Wicklow, Druid’s Glen, which has hosted four Irish Open golf championships, had been owned up to now by three Irish families – the Lappins, the Hurleys and the Flinns.

The five-star hotel traded as a Marriott resort when it first opened in 2002. It has 145 air-conditioned bedrooms and suites as well as a spa and health club, eight conference and event rooms, and a restaurant that can seat up to 160.

The clubhouse at the property, known as Woodstock House, dates back to 1770 and was once used as a writing and recording base by musicians, including Mike Oldfield and Rod Stewart.

While the resort’s appeal to the Neville Hotel Group and other prospective purchasers would have been enhanced by the absence of a brand or management agreement, the latest set of accounts for Obalus Hotel Company Ltd (the firm behind the Druid’s Glen hotel) show it returned to pre-tax profitability in 2017.

The company recorded the pre-tax profit after a pre-tax loss of €1.39 million in 2016 that arose from exceptional costs of €2.77 million.

According to the directors’ report, the hotel continued to trade strongly in 2017, reporting an operating profit of €1.3 million.

Commenting on the resort’s performance at the time of filing the accounts for 2017, the directors added that “2018 is already proving to be a strong year”.