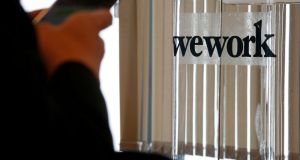 Irish property firm Ballymore and its Singapore partner Oxley are to lease almost 10,000sq m of commercial office in the Dublin docklands to office-sharing start-up WeWork.

The US firm, which is valued at $20 billion, will occupy No 2 Dublin Landings on North Wall Quay beside the new Central Bank headquarters and the new head office of the National Treasury Management Agency (NTMA). It is expected to move into the building in October.

Dublin Landings is one of the most important regeneration projects ever undertaken in Dublin and will, on completion, extend to more than 100,000sq m. In addition to the offices, retail and restaurant facilities, there are also plans to provide 288 apartments likely to appeal to many of the office personnel.

“Our vision for Dublin Landings has always been to create a culturally rich, inspiring community in the Dublin docklands area,” said John Mulryan, managing director of Ballymore UK and Ireland.

“A feature of our developments is ‘placemaking’ where we ensure that the buildings are integrated with the environment and public spaces and that they become the heart of the community.”

“The calibre of our Dublin Landings tenants, the NTMA, the Central Bank and now WeWork, is evidence of Ballymore and Oxley’s commitment to the creation of a vibrant new destination for Dubliners to live, work, and visit,” he said.

An estimated 2,000 construction jobs are being created during the entire development cycle in the Dublin docklands.

WeWork’s executive vice-president of Real Estate, Patrick Nelson, said, “Our Dublin locations have proved fantastically popular and we’re thrilled to be expanding our portfolio by adding a further WeWork location, this time in the architecturally impressive Dublin Landings.”

WeWork recently took a £58 million stake in the exclusive Devonshire Square complex in the City of London.

1 Irish company paid €1.2m a year by collapsed Blumenthal-linked Australian restaurant
2 Should AIB compensate me for upsetting letter on arrears?
3 Hugo MacNeill steps back from Goldman Sachs role
4 Legal eagles yet to land; economy to grow 3.4% this year; and CEOs on social media
5 ‘I wouldn’t be a big saver. I tend to buy now and repent at leisure!’
6 Why bosses should not be afraid of speaking out on Instagram
7 Greencoat Renewables buys Clare wind farm for €35.4m
8 Clean energy’s dirty little secret on wind turbines
9 Tax shifts won’t drive multinationals out of Ireland - Moody’s
10 Irish economy to grow by 3.4% this year, predicts EY
Real news has value SUBSCRIBE