Guide of €9m for mixed-use building in Dublin 2 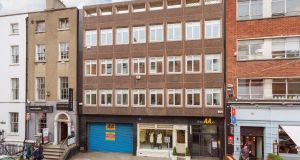 Maryland House is a landmark building at 21-22 South William Street.

After 45 years in the ownership of the same family, a five-storey office and retail building with dual frontage on to South William Street and Drury Street in Dublin 2 is to be offered for sale by private treaty.

James Nugent of Lisney is guiding €9 million for Maryland House, a landmark building at 21-22 South William Street with considerable scope for changes that would greatly enhance it as well as the second retail outlet on Drury Street.

Built in 1973, Maryland House extends to 1,416sq m (15,244sq ft), with four of the five floors used as offices by the Automobile Association at an annual rent of €561,730. The ground floor is let to two retail tenants, one on South William Street and the other on Drury Street, bringing the total passing rent to €611,730 per annum.

Internally, the office accommodation has been refitted and upgraded, and now benefits from newly installed suspended ceilings and light fittings as well as a new air conditioning system. The next owner of the high-profile property will inevitably set about eliminating 22 surface and basement car parking spaces, as well as large roller shutter doors, which look out of place on both streets.

James Nugent said there is “latent development potential, subject to planning and vacant possession, to convert these car spaces into further commercial accommodation and thus increase the rental income”.

South William Street is a thriving and bustling city centre location with a variety of independent stores and an expanding range of restaurants, cafes, bars and fashion outlets that have cornered much of the business once based in Temple Bar.

More than a year ago, Friends First bought nine retail and office properties mainly on South William Street for €30 million. The portfolio, originally assembled by property developer Bernard McNamara, is being redeveloped and upgraded by Claire Solon, who heads up the property division in Friends First.

South William Street is frequently referred to as a “Creative Quarter”, which allows it to be marketed for hosting “exceptional artisan boutiques, studios, cafes and restaurants”.

1 Michael Smurfit: ‘I asked Trump to invite me to the White House for my 80th birthday’
2 Small businesses are cannon fodder in zealous anti-virus experiment
3 ‘I’m so lucky to be in the Caribbean – a million miles from Derry Girls’
4 Ryanair expects air fares to fall when flights take off again
5 Irish business of Carluccio’s restaurants to be wound up
6 Tax and the Pandemic Unemployment Payment: Your questions answered
7 ‘Never mind GDP; the most fundamental job of any leader is to keep his people alive’
8 Household savings soar as consumers stop spending
9 Coronavirus: Technopath offers employers not-for-profit antibody tests
10 Revenue fears fraudsters tapped bank details of 3,000 taxpayers
Real news has value SUBSCRIBE