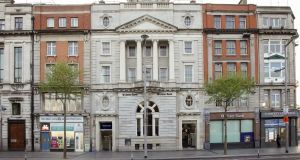 International property manager AEW has made its second significant investment in the Dublin property market, buying a landmark building at 2-4 Lower O’Connell Street in Dublin 1, which is let to Ulster Bank on a long-term basis. The €12.5 million investment will show a yield of around 4.5 per cent.

Unusually, the lease is subject to annual rent reviews based on the United Kingdom Retail Price Index subject to an annual cap of 3 per cent. The UK RPI has averaged 3-4 per cent over the past 30 years.

The 1,130sq m (12,060sq ft) building was initially sold at the height of the property market in 2007, when Ulster Bank disposed of it on a sale and leaseback basis.

Located on the east side of Lower O’Connell Street, between O’Connell Bridge and Abbey Street, the building comprises two interconnected five-storey over-basement period structures. There is a banking hall on the ground floor, storage and ancillary space at basement level, and offices on the upper floors.

Dessie Kilkenny of Savills, who advised AEW, said he would not be making any comment.

Last April AEW paid about €20.5 million for a high-profile retail premises occupied by women’s fashion outlet Evans at 42-43 Henry Street. That investment is showing a return of 4.2 per cent.

The Ulster Bank premises had been owned since 2014 by the late Norwegian philanthropist Erik Henriksen (58), who died in the Cayman Islands in November 2015 after his high-speed boat hit a wave.